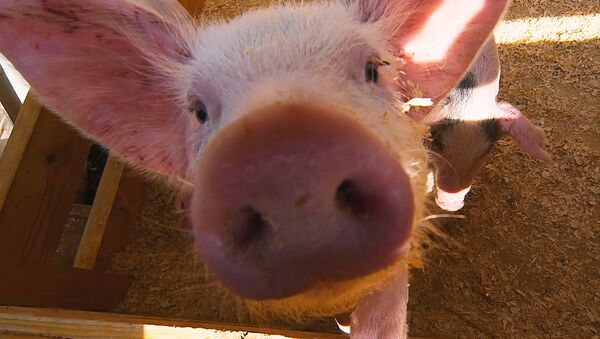 © RIA Novosti . Tatiana Sourenkova
/
Go to the mediabank
Subscribe
International
India
Africa
One Russian football club has made a surprising breakthrough in tackling the ongoing problem of unruly fans’ use of flares.

MOSCOW, December 22 (RIA Novosti) – One Russian football club has made a surprising breakthrough in tackling the ongoing problem of unruly fans’ use of flares.

Deputy General Director of St. Petersburg based soccer team Zenit, Yury Fedotov, told Russian sports news site sportbox.ru that, in tests, pigs had proved to be just as effective as dogs at identifying hidden flares. He added that modern technology had nothing that could outperform either animal in this regard.

The soccer team Zenit made headlines in November when a flare thrown from the Zenit end of the stadium hit opposing team Dynamo’s Anton Shunin during a Russian Premier League game. Shunin was briefly hospitalized with eye injuries as a result.

Russian soccer fans’ use of flares became a particularly high-profile issue after this incident, with Prime Minister Dmitry Medvedev calling for the culprits to face lengthy stadium bans: “If someone has committed a crime in the stadium, then in that case the state has the right, and is obliged to, ban him from going to the stadium for a long time.”

In Tomsk, a city in Siberia, soccer fans complained to prosecutors in November after a section of the crowd was soaked with cold water after flares were lit during a game.