Putin Defends Own Record, Criticizes US in Marathon Q&A 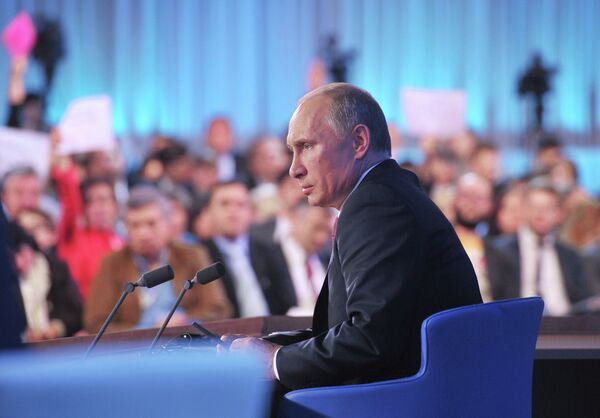 Russian President Vladimir Putin rejected allegations Thursday that he had constructed an “authoritarian regime” during his years in power, touting the country’s stability and adding that he had not made any major mistakes he would want to fix.

MOSCOW, December 20 (RIA Novosti) - Russian President Vladimir Putin rejected allegations Thursday that he had constructed an “authoritarian regime” during his years in power, touting the country’s stability and adding that he had not made any major mistakes he would want to fix.

“I cannot call this system authoritarian,” he told over 1,000 Russian and foreign journalists in a wide-ranging, four-and-a-half-hour news conference in Moscow, which included heated criticism of the United States and comments on topics ranging from the crisis in Syria to the end of the world.

If he had wanted to stay in power, Putin added, he could have easily changed the Constitution to stay for a third consecutive term as president in 2008.

“It would have been easy to do,” he said.

Putin, a former KGB officer who first became president in 2000, is accused by critics of taking away many post-Soviet political freedoms and building a system in which all major political institutions are ruled from the Kremlin.

Over the past six months, Putin has faced accusations of a crackdown on opposition activists, a number of whom are facing long jail terms, and criticism over a series of “repressive” laws on state treason, nongovernmental organizations, street protests and internet censorship.

But he defended his record with vigor at Thursday’s news conference – which was aired live in its entirety on state television and radio – showing little indication of recently rumored health problems, and denying them outright.

Putin hailed the country’s economic achievements, including minimizing fallout from the euro crisis, growing GDP and low inflation and unemployment.

Asked whether he had made any major mistakes during his tenure, Putin retorted with a twist on the Biblical maxim, saying, “Let he who is without sin among us, or among you, cast the first stone at me.”

“Probably, there were mistakes,” he said, but “I do not see any major, systemic errors that I would want today to turn back around or somehow fix.”

Putin grew most heated when talking about the United States, particularly its recent legislation aimed at punishing Russian officials believed to have committed human rights violations and a controversial adoption ban that the Russian parliament is poised to pass in response.

“But,” he added, “we, or I, must be a bad Christian: When they strike you on one cheek, you should turn the other. But I’m not morally prepared for that yet,” he said, in the second of two references to the Bible during his appearance.

Putin voiced support for the proposed adoption ban – though he acknowledged he hadn’t yet read the legislation in detail – and complained bitterly that US authorities do not allow Russian officials to monitor the condition of adoptive children or sit in on court hearings regarding their well-being.

“Don’t demean the country,” Putin said. “Russia can’t be treated that way, and neither can the children who are adopted.”

He also hit out at the United States over its own human rights record, particularly in its prison system. The US legislation that has caused such dismay among Russian officials, known as the Magnitsky Act, is named after a whistle-blowing Russian lawyer alleged to have been tortured to death in pre-trial detention in 2009 after accusing a group of Russian officials of massive tax fraud. Putin insisted that Sergei Magnitsky had not been tortured, but died of a heart attack and the question was whether he had received adequate care.

“Do you think no one dies in American jails?” Putin asked, and pointed to documented human rights abuses at the US-run Abu Ghraib jail in Iraq, and the continued existence of the controversial Guantanamo prison camp.

“Those so-called secret CIA jails,” he went on. “Who has been punished?”

In a broad range of comments on international and domestic issues (links to more detailed coverage), Putin:

- Reiterated that Russia has no stake in the survival of Syrian President Bashar al-Assad’s embattled regime, but insists on negotiations instead of military force to ensure that the country does not start “disintegrating” like Libya: “We are concerned about … what comes next,” Putin said. “We simply do not want today’s opposition, having come to power, to start a fight with today’s authorities, who will go underground, and for this to continue eternally.”

- Criticized Ukraine for failing to rent out its Soviet-era gas transportation system to Russia.

- Said protesters should not be jailed for taking part in illegal rallies, but spoke in favor of harsh punishments for demonstrators who attack police.

- Spoke against headscarves in schools.

Masha, Vova and the End of the World

The marathon Q&A included some light, personal moments as well.

Journalists attempted to attract the attention of Putin’s press secretary, Dmitry Peskov, who was seated to the president’s left, by waving signs, small flags and even a photograph of a cat throughout the news conference, which fell seven minutes short of Putin’s previous record for his annual press conferences.

Exchanges between Putin and the journalists ranged from the fawning – “You are such an energetic, handsome man,” said a journalist from Russia’s Far East – to the tense, in particular an exchange with Los Angeles Times correspondent Sergei Loiko, who accused the Kremlin of inaction in investigating Magnitsky’s death and the tax fraud he had reportedly uncovered.

Putin was also memorably addressed by an informal diminutive of his name during an exchange with journalist Maria Solovenko from Russia’s Far Eastern Primorsky Region.

“Thanks, Vova,” Solovenko replied, triggering a storm of Twitter commentary.

Putin also answered a rare question about his daughters, saying both were living in Moscow, studying, working and “doing well” in everything including their personal lives. “I’m proud of them,” he said.

The president defended the headline-grabbing French actor Gerard Depardieu, who recently renounced his French citizenship over what he considers exorbitant tax rates, as a true French patriot and said he could count on getting Russian citizenship if he wants it.

Putin also dismissed widespread speculation that the world would end on Friday: “The world will end in around 4.5 billion years,” he said, citing scientific theories on the workings of our solar system.