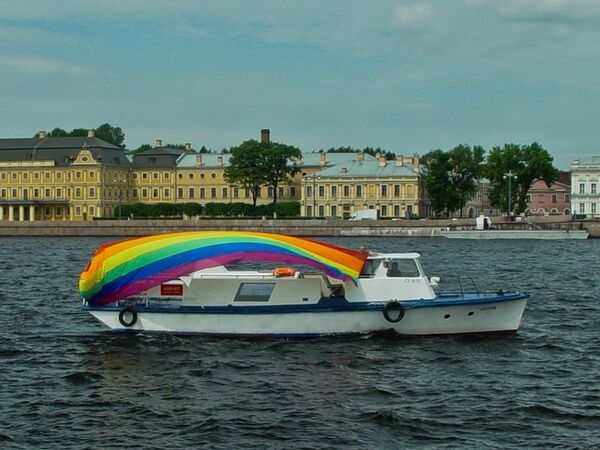 © Photo : Pavel Semyonov
Subscribe
They are the people whom many Russians blame for “gay propaganda,” but at least they are not afraid to speak out on the issue.

MOSCOW, December 20 (RIA Novosti) – They are the people whom many Russians blame for “gay propaganda,” but at least they are not afraid to speak out on the issue.

The cream of the crop of Russia’s much-lambasted pop scene attacked on Thursday a controversial law that bans “gay propaganda” in St. Petersburg, calling for its author to be kicked out of the city legislature.

“We…are very concerned about the expanding campaign to present St. Petersburg as a capital of homophobia and obscurantism,” said an open letter to President Vladimir Putin and Prime Minister Dmitry Medvedev that was signed by some 300 celebrities, including leading pop stars.

“There was no other person in the history of St. Petersburg to have disgraced the city throughout the world in such a short period of time,” the letter said about the law’s author, Vitaly Milonov.

However, the document threw a logical curveball, criticizing Milonov over inefficiency of the attempts to oppose “gay propaganda” while supporting the ban.

“I’m totally against Sodomite propaganda, but also against publicity stunts and crude work by some legislators,” singer Valeria, who worked with Bee Gees’ Robin Gibb and performed with Simply Red, wrote on Twitter.

The letter was also signed by ex-goalkeeper of the Russian national football team, Vyacheslav Malafeyev, and famous skater Yevgeny Plyushchenko, among others.

“Kirkorov’s support would have done more harm to me [than his criticism does],” Milonov said on Thursday, Rossiiskaya Gazeta reported.

Neither Putin nor Medvedev commented on the letter as of Thursday evening.

St. Petersburg legislature made in March “propaganda of gay lifestyle” to minors an administrative offence. The bill was filed by Milonov, a member of the ruling United Russia and a self-professed Christian activist.

The law was lambasted by US pop star Madonna at her show in St. Petersburg. Anti-gay rights activists later sued the show’s promoters, but unsuccessfully.

Ninety-two percent of Russians have never encountered gay propaganda, but 86 percent support the ban, according to a nationwide poll by state-run VTsIOM in April.

Of those who encountered “gay propaganda,” 57 percent said they witnessed it on television, where pop stars, including Milonov’s critics, are regular features.

Many Russian performers, including Bilan and Kirkorov, are prone to mannerisms and kitschy attire that have earned them accusations of being “closet gays” in tabloid press.