Putin Sticks It to US for Prison Abuse, Torture 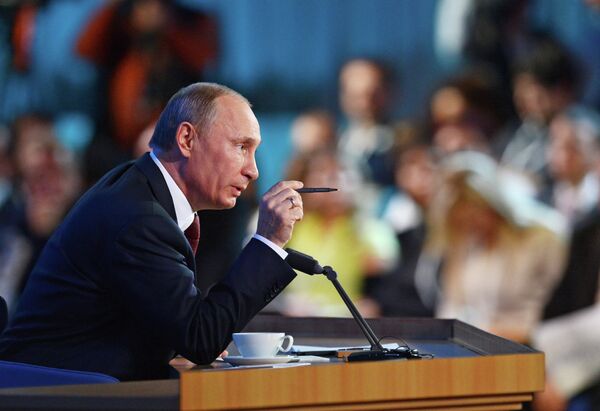 © RIA Novosti . Ilya Pitalev
/
Go to the photo bank
Subscribe
Russian President Vladimir Putin struck a defensive pose towards the United States in his major press conference of the year Thursday, criticizing rights abuses in US prisons and warning against insults to Russia’s honor.

MOSCOW, December 20 (RIA Novosti) – Russian President Vladimir Putin struck a defensive pose towards the United States in his major press conference of the year Thursday, criticizing rights abuses in US prisons and warning against insults to Russia’s honor.

In comments reminiscent of the Soviet-era tactic known as “what-about-ism,” Putin took issue with US officials’ criticism of Russia, advising them to take a closer look at their own problems, including what he called the legalization of torture.

“What worries our partners in the States and American legislators? Human rights in our prisons. That’s a good cause, but they’ve got a lot of problems of their own there,” Putin told reporters in Moscow.

He cited the Abu Ghraib prison in Iraq and the notorious facility in Guantanamo Bay, where, he said, inmates are held without charges for years and made to wear shackles “like in the Middle Ages.”

“They’ve legalized torture inside their own country!” Putin said about the United States. “Can you imagine what [would happen] if we had anything like that here? We’d’ve been eaten alive ages ago!”

Putin did not specify what he considered legalized torture in the United States. Amnesty International has criticized the US penitentiary system over its allegedly excessive use of confinement in isolated cells and stun belts. The CIA has also been criticized for subjecting terrorism suspects to waterboarding before the practice was banned by President Barack Obama in 2009 and, in 2001-2005, engaging in extraordinary rendition, or the practice of sending prisoners to countries where harsh interrogation techniques forbidden in the United States could be applied.

“If we’ve been smacked, we’ve got to respond; otherwise, we’ll keep getting smacked,” Putin said about the Magnitsky Act, adding indignantly that “they did it without provocation.”

In November, about 250 inmates at a prison colony in the city of Kopeisk in the Urals staged a peaceful protest, claiming that the prison administration systematically tortured them and extorted money from them. An investigation is ongoing.

In February, a man in Tatarstan died of injuries he received after policemen raped him with a champagne bottle in pretrial detention. The case got widespread media attention. Two officers were convicted and seven others are on trial over the incident.

No official statistics on torture in Russian prisons are available because the Russian Criminal Code has no separate article for torture. A report by independent Russian rights activists presented to the United Nations’ Committee Against Torture in November said 424 complaints about abuse in prisons and pretrial detention centers were filed in Russia in 2009, the latest year for which data were available, but only seven prison employees were charged.

Only 60 investigators nationwide work to probe prison abuse in Russia, which had a prison population of 602,000 as of August, according to the Federal Prison System. Prisoner rights activists say many abuse cases are never investigated.