Putin Likens Libya Now to Syria in Event of Invasion 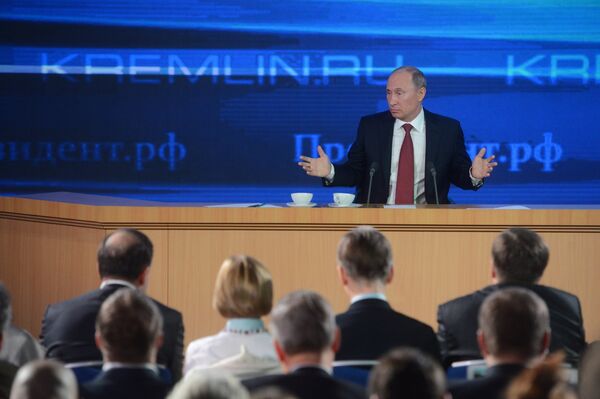 © RIA Novosti . Ilya Pitalev
/
Go to the photo bank
Subscribe
Russian President Vladimir Putin reiterated his opposition to military intervention in Syria on Thursday, emotionally citing the volatile situation in Libya as a sign of what would likely happen as a result.

MOSCOW, December 20 (RIA Novosti) – Russian President Vladimir Putin reiterated his opposition to military intervention in Syria on Thursday, emotionally citing the volatile situation in Libya as a sign of what would likely happen as a result.

Libya “is disintegrating,” Putin said at a major press conference in Moscow, pointing to the fractious groups that have been struggling for control of the country since longtime ruler Muammar Gaddafi was ousted with NATO’s help last year.

And Russia, in turn, is trying to prevent “disintegration and unending civil war” in Syria, he said.

“Interethnic, inter-clan, inter-tribal conflicts are continuing [in Libya]. Moreover, it’s come to a tragedy – the murder of a US ambassador. Was this the result of the work?” Putin said about foreign intervention in Libya.

“You’ve asked me about [my] mistakes, but wasn’t this a mistake? And do you want us to go on constantly repeating these mistakes in other countries?” Putin told reporters.

Putin emphasized that Russia does not care about “the fate of the regime” of Syrian President Bashar al-Assad per se and understands that change is necessary, but negotiations should be the way to regime change, without armed intervention. Assad’s regime has been locked in a bloody battle with an increasingly motley group of insurgents since March 2011.

“Agreements on the basis of a military victory are inappropriate here and cannot be effective,” Putin said.

Russia has staunchly opposed all international efforts to crack down on Assad, including in the UN Security Council, saying they are biased in favor of the Syrian opposition.

When asked by a reporter whether Moscow’s hardline stance on Syria could isolate Russia and undermine its position in the Middle East, Putin snapped: “Listen, my dear, did Russia’s position in Libya not get weaker after the mess the interventionists made there?”

“Of course, we’re interested in the Russian Federation’s position in the region,” Putin said, but added that Moscow does not have major interests in Syria. Russia keeps an aging naval supply base in the country, its last remaining overseas base.