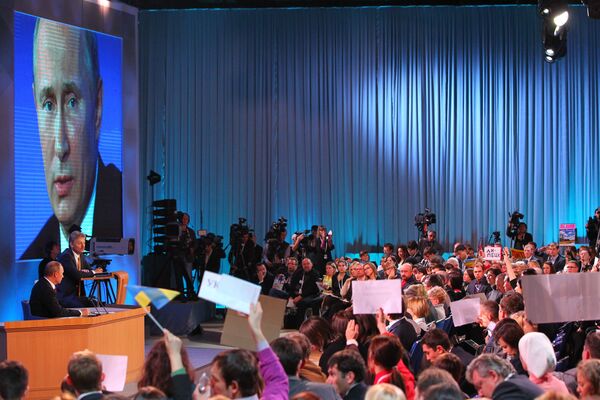 © RIA Novosti . Michail Klimentiev
/
Go to the photo bank
Subscribe
President Vladimir Putin rejected as baseless accusations that the Russian judiciary is not independent and its judges are corrupt.

MOSCOW, December 20 (RIA Novosti) - President Vladimir Putin rejected as baseless accusations that the Russian judiciary is not independent and its judges are corrupt.

“I disagree with the statement that we lack a fully independent judicial system. On the contrary, it certainly exists in this country,” the president told journalists on Thursday. “I disagree with sweeping accusations that our judiciary and certain judges are corrupt.”

Judges in Russia are immune from criminal persecution and investigations into possible abuses by judges, as well as any disciplinary action, are administered by the judicial system itself, Putin said.

“There was a time when many experts wondered whether we had gone too far, effectively exempting the judiciary from state and public control,” he said.

He called for a public discussion on possible ways to improve the court system in Russia.

Western organizations and rights groups have repeatedly criticized Russia's judiciary over its lack of independence and impartiality, and expressed concern over politically motivated trials.

Last year the European Parliament expressed its “concern over reports of politically motivated trials, unfair procedures and failures to investigate serious crimes such as killings and harassment.”

They mentioned the case of Yukos founder Mikhail Khodorkovsky and the death in detention of lawyer Sergei Magnitsky as examples. European Parliament members also said that "no effective investigations" were carried out into the murders of journalists Anna Politkovskaya, Natalia Estemirova and Anastasia Baburova.