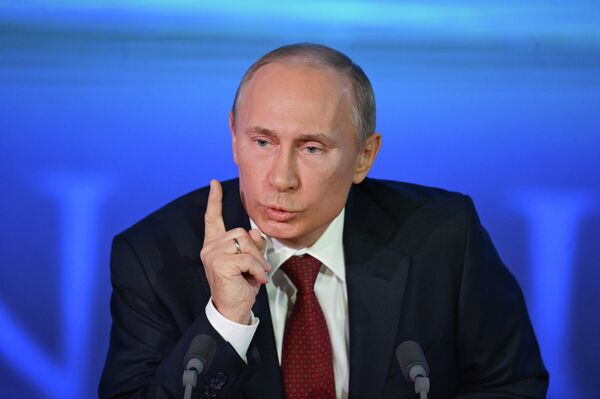 Russian President Vladimir Putin backed a controversial tit-for-tat amendment that would ban US citizens from adopting Russian children at a press conference on Thursday.

“It’s an emotional, but adequate response,” Putin said, answering the first query of many at a question-and-answer session with about 1,000 Russian and foreign journalists, the first of this scale in his third presidential term.

The proposed amendment banning US adoptions is part of a larger bill retaliating for the enactment of the Magnitsky Act in the United States, which imposes visa bans and asset freezes on Russian officials deemed guilty of human rights abuses. The US law was passed simultaneously with the lifting of the 1974 Jackson-Vanik amendment, which had tied trade relations with the Soviet Union to the emigration of Jews and other Soviet minorities.

“They [the United States] replaced one anti-Soviet, anti-Russian law with another. They can't do without it,” Putin said, adding that Washington’s decision will mar bilateral relations.

The adoption ban is the most controversial aspect of the proposed legislation, which also proposes to ban alleged US abusers of Russian citizens’ rights from entering Russia, to ban political NGOs funded by US sources and to bar US citizens from working for politically active NGOs in Russia, freezing any assets they may have in the country. The proposed amendment would also bar Russian organizations from facilitating adoptions by US citizens.

The adoption ban was a key issue at the press conference, raised by a number of reporters, including one who said he is himself an adoptive father and called the legislation "cannibalistic."

In response, Putin harshly criticized US courts for barring Russian officials from being present at court hearings concerning adopted Russian children, saying that the practice humiliates Russia as a state.

“I consider it unacceptable. Do you think it’s normal? Is it normal when someone humiliates you? Do you enjoy it? What are you, a sadomasochist?” Putin asked the reporter, Alexander Kolesnichenko.

Making it clear that this is not about particular individuals, he stressed that the character of those Americans who choose to adopt Russian children was not the issue, "tragedies happen, we know that, but the overwhelming majority of people who adopt our children behave appropriately, they are fine, upstanding people," Putin said. "The deputies in the State Duma reacted not to this activity, but to the American authorities' position."

The bill was passed by the Duma in its second reading Wednesday. If passed in the final reading Friday, the bill has to be approved by the Federation Council and signed by Putin to become law. While answering another question, Putin said that he has not yet seen the text and could not immediately say whether he would sign the bill or not.

A reporter with Novaya Gazeta told Putin that the newspaper has collected at least 100,000 signatures against the adoption ban, reminding him that he had said earlier that this number would be sufficient for a proposal to be considered by the State Duma.

Putin briefly agreed that the counter-initiative should be discussed by the lawmakers.

The ban on US adoptions has sparked a public outcry among both officials and civic groups. Critics say the move will strand thousands of children, especially those with disabilities, in Russia’s outdated state institutions.

Since 1999, parents in the United States have adopted more than 45,000 Russian children, including 962 last year, according to the US State Department. Russian officials claim at least 19 Russian children adopted by Americans have died in that period, Russia's ombudsman for children's rights has said.

(Updated to include detail - views on US families who adopt, Duma reaction to US position)