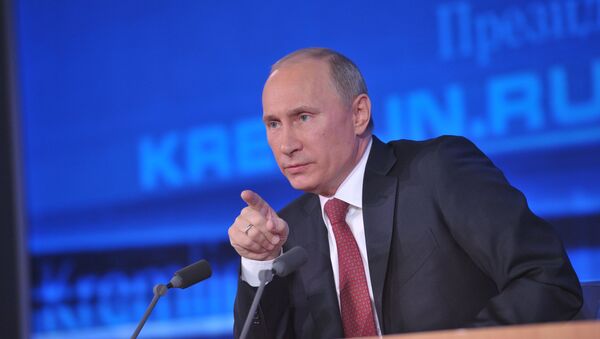 © Sputnik / Aleksey Nikolskiy
/
Go to the photo bank
Subscribe
Ukraine committed a strategic error several years ago when it refused to rent out its Soviet-era gas transportation system to Russia and the European Union, President Vladimir Putin said on Thursday.

MOSCOW, December 20 (RIA Novosti) – Ukraine committed a strategic error several years ago when it refused to rent out its Soviet-era gas transportation system to Russia and the European Union, President Vladimir Putin said on Thursday.

“We believe Ukraine committed a strategic, fundamental mistake. We offered jointly with the Europeans to take Ukraine’s gas transportation system on lease, without breaching Ukrainian legislation while keeping it in Ukraine’s ownership,” Putin said at an annual Q&A session in Moscow.

Had Ukraine agreed, Russia would have assumed obligations for developing and fully loading Ukraine’s gas transportation system, Putin said, adding that Russia “is ready, even today, to hold talks on this issue.”

Control over the Ukrainian gas transportation system has been a stumbling block in Kiev’s negotiations with Russian gas monopoly Gazprom over the volume and price of gas supplies to the ex-Soviet republic. Gazprom has repeatedly indicated its interest in controlling Ukraine’s gas transportation system, the main transit route for Russian gas supplies to Europe, in exchange for lowering gas prices for Kiev.

“Everything that has happened in the past few years, including the notorious 2009 scandal, has prompted Russia to accelerate the implementation of its infrastructural projects,” Putin said.

Russia and Ukraine have long fought over natural gas deliveries, jeopardizing supplies to Europe, which gets around a quarter of its gas from Russia. In the latest row in early 2009, Russia halted all deliveries via Ukraine's pipeline system for two weeks after the two former soviet states failed to agree a price for Russia’s gas deliveries to Ukraine.

The gas deal eventually signed between Moscow and Kiev in 2009 tied the price for Russian gas to international oil prices, which have risen significantly since 2009, boosting Ukraine's bill.

“Now we have extended our oil pipeline to the Pacific Ocean and we will also develop gas supplies in the country’s east. We will also develop LNG, and there will no longer be this dependence on traditional transit zones,” he said.

Back in early 2000s, Kiev and Moscow discussed the possibility of creating a gas transport consortium with the involvement of European partners to manage and modernize Ukraine's dilapidated Soviet-era gas pipeline network.

However, when West-leaning President Viktor Yushchenko came to power in Ukraine, the project was put on hold. The Ukrainian authorities said at the time that leasing out the gas transport network would jeopardize Ukraine’s sovereignty.

Russia has completed the construction of the Nord Stream’s two parallel pipelines along the Baltic Sea bed, which will pump 55 billion cu m of gas to Europe once they reach capacity.

On December 7, Gazprom launched the construction of the South Stream gas pipeline, which will run along the Black Sea seabed and pump 63 billion cubic meters of natural gas to Europe each year.