Police Detain 20 People at Rally Against US Adoption Ban 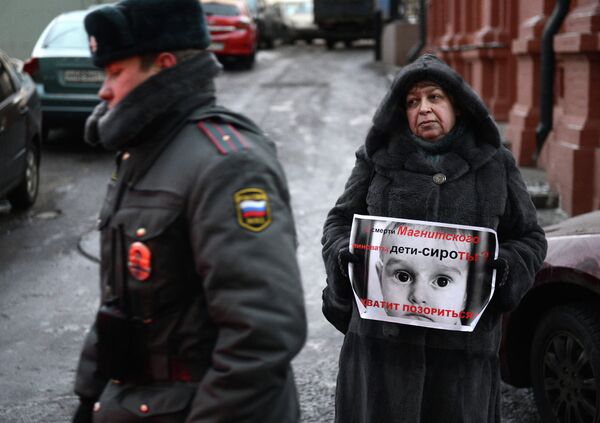 © RIA Novosti . Maxim Blinov
/
Go to the mediabank
Subscribe
International
India
Africa
Police detained about 20 people staging a picket Wednesday morning outside the State Duma, ahead of the second hearing of a bill that would ban US citizens from adopting Russian children.

MOSCOW, December 19 (RIA Novosti) – Police detained about 20 people staging a picket Wednesday morning outside the State Duma, ahead of the second hearing of a bill that would ban US citizens from adopting Russian children.

The draft law, dubbed the Dima Yakovlev bill, was proposed as part of the Russian “response” to the US of the Magnitsky Act – a US law introducing visa bans and asset freezes for Russian officials. The bill is to be considered by the State Duma, Russia’s lower house of parliament, in its crucial second reading on Wednesday. The original bill, without the adoption amendment, was approved by the lawmakers last week.

Dozens of people gathered outside the Duma building near the Kremlin in downtown Moscow to protest against the adoption ban that critics say would leave Russian children stranded in outdated state care institutions.

The police detained two dozen activists holding placards. Dozens more, not holding banners or placards, remain outside the building, despite requests from the police that they disperse.

If the bill passes its second reading on Wednesday, it would be likely to be passed in its third and final reading on Friday, potentially coming into effect in 2013 after being approved by the Federation Council and signed by the president.

The bill is named after Dima Yakovlev, a 21-month-old who died of heatstroke in July 2008 after his adoptive father, Miles Harrison, left him unattended in a car for nine hours.

The adoption ban is the most controversial aspect of the proposed legislation, which also proposes to ban alleged US abusers of Russian citizens’ rights from entering Russia, and freezing any assets they may have in the country.