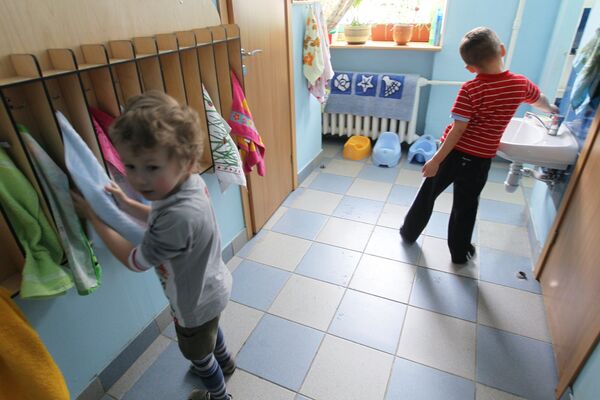 Several highly placed Russian officials spoke out this week against lawmakers’ plans to ban US citizens from adopting Russian children, as the measure’s supporters defended it and liberal-minded public figures inveighed against it.

MOSCOW, December 18 (RIA Novosti) – Several highly placed Russian officials spoke out this week against lawmakers’ plans to ban US citizens from adopting Russian children, as the measure’s supporters defended it and liberal-minded public figures inveighed against it.

The ban was proposed recently as part of a draft law to be considered by the State Duma, Russia’s lower house of parliament, in its crucial second reading on Wednesday. The original bill, without the ban, passed a first reading last week, and comes as retaliation for the recently enacted Magnitsky Act – a US law introducing visa bans and asset freezes for Russian officials implicated in the 2009 death of whistle-blowing lawyer Sergei Magnitsky.

The ban, proposed as an amendment to the Duma bill, would prohibit US citizens from adopting Russian children and bar certain adoption agencies from operating in Russia.

Education and Science Minister Dmitry Livanov, whose ministry is responsible for orphanages and adoptions, criticized the move Monday.

“It’s a tit-for-tat step but the logic is wrong, because it will affect those of our children who cannot find parents in Russia,” he wrote in his Twitter feed.

But Duma deputy Olga Batalina, a lawmaker with the United Russia party and a member of the Duma’s Committee for Family, Women and Children’s Affairs, fired back, saying Livanov had demonstrated he was “unfit for his job.”

Foreign Minister Sergei Lavrov also called the ban “wrong,” saying Tuesday that he hoped “the State Duma will make a balanced decision.” He noted, however, that Moscow should “react harshly” to any cases of abuse against Russian children abroad.

Backers of the ban often cite cases of neglect and violence by US adoptive parents against Russian children, which have gotten widespread media attention in Russia. Some lawmakers have proposed naming the bill in honor of one such child, Dima Yakovlev, a 21-month-old who died of heatstroke in July 2008 after his adoptive father, Miles Harrison, left him unattended in a car for nine hours.

Harrison was later acquitted by a Virginia court of involuntary manslaughter, fueling a wave of criticism from Russia.

Nineteen Russian children have died in American families over the past decade, according to the office of Pavel Astakhov, Russia’s ombudsman for children’s rights.

Astakhov, an opponent of foreign adoptions, defended the ban at a press conference Tuesday, saying “it should have been done long ago.”

“We need to protect our children,” he added.

Astakhov, a longtime ally of President Vladimir Putin and a US-trained lawyer, said Russia’s response falls “in line with international practice,” and would not acknowledge the planned adoption ban as “a political act.”

Russia suspended adoptions by US citizens two years ago, after the adoptive American mother of 8-year-old Artyom Savelyev sent him alone on a plane back to Russia with a note saying she could no longer take care of him.

Ultimately, the two countries signed a bilateral agreement aimed at improving oversight and reducing abuses of adopted Russian children, which went into effect on November 1. If the new amendments are signed into law, the agreement would be annulled.

Astakhov, who initially supported the agreement, said Tuesday that it had not produced any results within the weeks since its enactment, and Russian officials still experience difficulties when trying to oversee the welfare of adoptive Russian children in the United States.

While US citizens adopted more Russian children last year than families from any other country, as a portion of overall adoptions the number was tiny. According to Education Ministry statistics, Americans adopted 956 Russian children in 2011, or less than 1 percent of the total. Foreigners accounted for 31.4 percent (3,400) of last year’s adoptions in Russia, while Russian citizens ­­made up 68.6 percent (7,416).

Between 1991 and 2006, some 1,220 adopted children died in Russia, according to data reported earlier by RIA Novosti, including 12 killed by their parents. Figures for more recent years were not immediately available.

Critics of the proposed Dima Yakovlev bill warn that it would seriously hurt disabled children, who, they say, are frequently adopted by foreigners.

In 2011, according to ministry figures, 89 of the children adopted by American families, or about 9 percent, were registered as having disabilities.

Valery Panyushkin, a journalist and children’s charity organizer, slammed the proposed ban on his Facebook page, noting that he knows of at least nine children with disabilities ranging from Down syndrome to cerebral palsy waiting for court decisions to be adopted by Americans.

“I know of only two organizations in the world that start destroying their own children in order to scare their foes: Hamas and the United Russia party,” he wrote, apparently alluding to Hamas’ practice of fighting battles in densely populated areas, where civilian casualties are likely.

“Who will adopt those children? What alternative will the state offer them? Maybe the palaces and apartments of officials from the Magnitsky list?” prominent journalist and Esquire Russia editor Andrei Loshak wrote in a comment. “Even terrorists release women and kids.”

While the adoption ban is the most controversial aspect of the proposed legislation, the bill puts forward other retaliatory measures as well, like banning alleged US abusers of Russian citizens’ rights from entering Russia and freezing any assets they may have here.