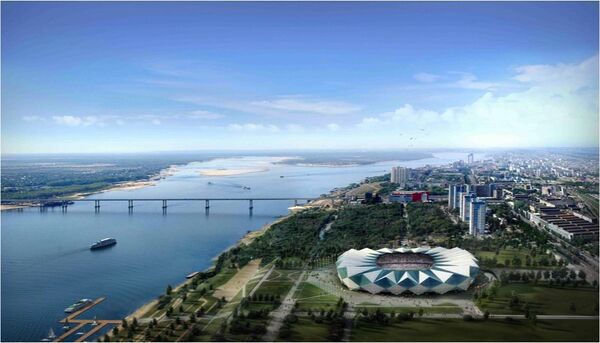 Preliminary estimates put the cost of the World Cup 2018 stadium in the Russian city of Volgograd at $380 million, designers said Tuesday.

The 45,000-seater arena will be constructed on the site of the soon-to-be demolished home ground of second-tier side Rotor.

Dmitry Popov, the deputy director of the state company that designed the arena, Sport Engineering, said the angular building on the banks of the Volga River is likely to cost around 12 billion rubles ($380 million).

German constructors GMP Architects are likely to bring the designs to life, with the start of the building work scheduled for 2014.

The city's total spending for the World Cup is planned to exceed $1.2 billion, more than half of which come from budgetary sources, said deputy head of Volgograd Region administration Oleg Kersanov.

Last week, FIFA president Sepp Blatter declared that preparations for the Russian World Cup were well ahead of his expectations.

The tournament will be the first World Cup held in Eastern Europe and is to be spread across 12 stadiums in 11 host cities.