Duma to Consider US Adoptions Ban 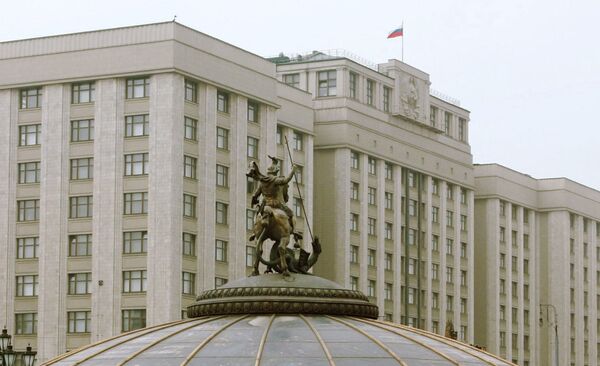 MOSCOW, December 17 (RIA Novosti) - The lower house of the Russian parliament is likely to endorse an amendment banning the adoption of Russian children into US families, Deputy Speaker Sergei Neverov said on Monday.

The State Duma on Friday gave its preliminary approval to a draft law penalizing US nationals involved in violating Russian citizens’ rights, touted as Moscow’s response to the Magnitsky Act.

Under the Russian bill, submitted to the State Duma last Monday, alleged US rights abusers, including people implicated in the abuse of adopted Russian children, will be banned from entering Russia and have their assets in Russia frozen.

The amendment would apply to all US nationals, Neverov, of the ruling United Russia party, said. “I think it will be approved,” he added.

Yekaterina Lakhova, a co-author of the amendment, and also a member of United Russia, said the measure would include a ban on adoption agencies and an abrogation* of the existing Russian-US adoptions agreement.

The Duma must pass the bill in two more readings before sending it for approval to the upper house of parliament, the Federation Council.

The second reading is slated to take place on Wednesday, when this amendment will be proposed.

US nationals whose cases are being considered by Russia’s Investigative Committee could end up on the blacklist, Pavel Astakhov, the Russian president’s point man for children’s rights, told RIA Novosti.

The bill mirrors the US law named after whistleblowing lawyer Sergei Magnitsky, who died in a Moscow jail three years ago. US President Barack Obama signed the Magnitsky Act into law on Friday.

Magnitsky was arrested on tax fraud charges after accusing a group of Russian officials of embezzling $230 million of state money. He died after 11 months in pretrial detention. His death was officially blamed on his health problems, but the Kremlin’s own human rights council said in 2011 that he was severely beaten hours before dying, and Magnitsky’s supporters claim the case against him was fabricated in revenge for his exposes.

No officials have been prosecuted so far over Magnitsky’s death. Magnitsky himself faces posthumous prosecution by the Russian authorities on tax fraud allegations.

The US Magnitsky Act, which was bundled together with landmark legislation normalizing trade relations with Moscow, targets Russian officials implicated in his death with visa bans and asset freezes.

Russian President Vladimir Putin has criticized the US law as a “purely political, unfriendly act.”

*An earlier version of this story referred to "denunciation."