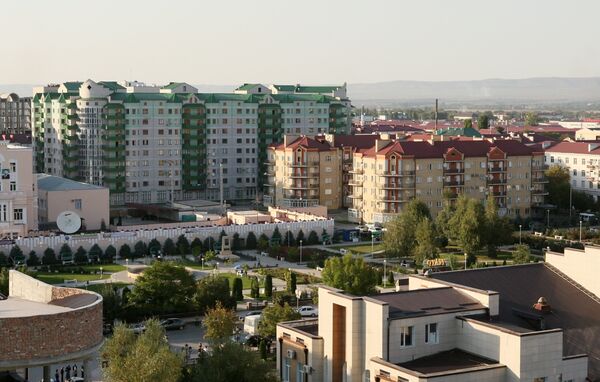 © RIA Novosti . Said Tsarnaev
/
Go to the photo bank
Subscribe
Official unemployment figures in the North Caucasus Republic of Chechnya have fallen dramatically over the past four years, the Regional Development Ministry announced Monday, attributing the success to a state program for the republic’s social and economic development in 2008-2012.

MOSCOW, December 17 (RIA Novosti) – Official unemployment figures in the North Caucasus Republic of Chechnya have fallen dramatically over the past four years, the Regional Development Ministry announced Monday, attributing the success to a state program for the republic’s social and economic development in 2008-2012.

The numbers were released a day after North Caucasus Presidential Envoy Alexander Khloponin announced that Russian big business will fund and implement large-scale infrastructure projects in the country’s volatile North Caucasus region to spur the area’s social and economic development.

Khloponin’s statement clarifies some details about a new State Program for the North Caucasus Through 2025 approved by the Russian government Thursday. The program stipulates 2.5 trillion rubles ($80.9 billion) in spending on the region in the next 13 years.

Ninety percent of these funds are to come from extra-budgetary sources, which had not been identified until Khloponin’s statement. Federal funding for the program has been set at about 235 billion rubles ($7.5 billion) in 2013-2020. It remains unclear whether the proposed funding includes money previously set aside for the region’s development.

“Big business will engage in the implementation of the state program. But this will not be budget money. This will be investment by large companies,” Khloponin said Sunday.

“For example, [Russia’s largest privately owned oil company] LUKoil will build an industrial park in Budyonnovsk [in the southern Stavropol Territory], including the largest petrochemical refinery with an investment of $140 million,” Khloponin said.

“Another project is a refinery in [Chechnya’s capital] Grozny, which [Russia’s largest state-controlled oil firm] Rosneft will build. There are also other projects that do not require state support measures. These are the projects of large corporations,” he said.

Large-scale projects included in the North Caucasus development program will create thousands of new jobs in the region, Khloponin said.

Analysts believe poor economic conditions and unemployment in the North Caucasus republics to be major factors driving local residents to join militant groups. The troubled region sees frequent attacks on law enforcement officers and government officials as Moscow continues to battle an Islamist insurgency there, while local power brokers wrangle for influence in the absence of effectual governance.

“The state will channel investment only into the social sphere while all the other funds will come from companies,” Khloponin said.