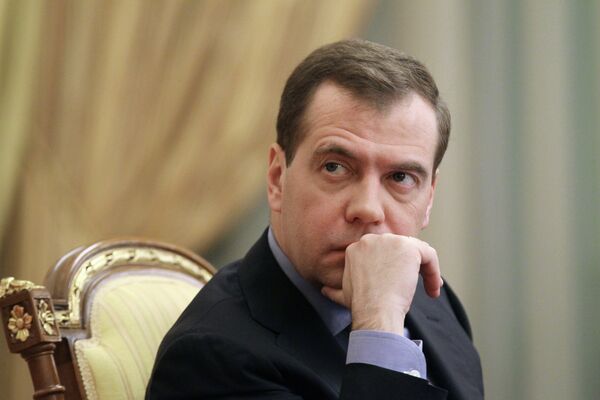 The Russian government is trying to pass tougher anti-hooliganism measures in the wake of several high-profile violent incidents at matches, and Medvedev has called for life bans for convicted hooligans.

“The task of purging is for the fan associations themselves, not for the state,” he said.

“The state won’t filter them and say: ‘You know, this one here’s a nasty one and we won’t let him in anywhere, but this one’s kind and good.’ The fans themselves should get around to this.”

Medvedev said his earlier comments on life bans had been criticized as heavy-handed by some fan leaders but that he stood by the principle of keeping hooligans away from sports events.

“If someone has committed a crime in the stadium, then in that case the state has the right, and is obliged to, ban him from going to the stadium for a long time,” he said.

“Come out of prison, watch it at home please.”

Proposals on banning convicted fans are being prepared by the Cabinet, he added.

The issue of football violence was thrust to the fore last month when a flare thrown from the stands left Dynamo Moscow’s goalkeeper Anton Shunin with eye injuries.