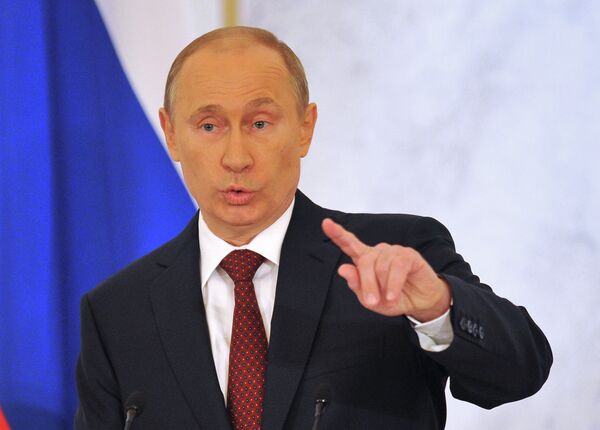 At times, the speech implicitly acknowledged demands articulated by opposition activists over the past year, but it did not directly address the large-scale street protests that were the highlight of Russia’s 2011-2012 political season.

Putin spoke in the Kremlin before a crowd of about 1,000 legislators and senior state officials for 78 minutes, his speech frequently interrupted by rounds of applause.

- Improvements in Russia’s demographics, to be achieved through monetary bonuses to families with several children, the promotion of a healthy lifestyle and improvements to living conditions through cheaper rent and mortgages. “Three children per family should become the norm for Russia,” Putin said.

- An overhaul of the country’s healthcare, science and education sectors. (Putin did not mention any increases in funding, which has waned in recent years.)

- Tackling the country’s “moral crisis” by promoting “traditional values” and revamping education, with a focus on moral and cultural upbringing, and strengthening national identity, largely through the use of history. Putin proposed creating a World War I memorial and reintroducing famous tsarist-era military units.

- A strong rejection of outright nationalism, dubbed a danger to Russia’s multi-ethnic social fabric. Putin ordered regional authorities to prevent the emergence of “closed ethnic enclaves with their own informal jurisdiction.”

- At the same time, he promised to tighten migration rules for citizens of former Soviet republics – except those that choose to join groupings like the Customs Union, a regional foreign-trade group currently comprising Russia, Kazakhstan and Belarus. The union is actively promoted by Moscow but potential members have been wary of joining.

- Putin said he is willing to consider the reintroduction of electoral blocs and single-mandate voting districts – measures that would open the doors to more independent lawmakers in the national parliament – though he added that the matter needs more discussion.

- He spoke vehemently against political actors in Russia accepting foreign funding in any form or for any purpose. This appeared to be part of a larger trend in which NGOs critical of the Kremlin have seen impediments to receiving foreign grants and a number of opposition activists have been accused of accepting money from foreign governments or their representatives.

- Putin proposed to “limit” the right of legislators and top officials to hold accounts in foreign banks or assets abroad. Real estate abroad would be allowed if its provenance can be explained – a softening of Putin’s own earlier proposal to ban officials from owning any assets abroad.

- Putin again called for rule of the law in Russia with the goal of “de-offshore-ization” – in other words, reversing the trend of Russian businesses officially registering in foreign offshore zones. The government was ordered to draft and present in 2013 a road map on improving the country’s business climate.

- About 100 billion rubles ($3.3 billion) from the previously untapped National Welfare Fund are to be invested in unspecified domestic infrastructure projects starting in 2013.

- Russia will keep its flat income tax of 13 percent while introducing a “luxury tax” to target the country’s rich.

- Russia should ensure its food safety by 2016 or 2017 and move on to become a major food exporter for the global market.

- Putin did not address any specific foreign policy issues, including the conflict in Syria, the economic crisis in the EU or even the US Magnitsky Act, which targeted Russian officials over rights violations, triggering outrage and retaliatory measures by the Russian parliament earlier this week.

- No explicit mention was made of the opposition protests that were sparked by allegations of vote-rigging during State Duma elections last December and continued in Moscow through this year. An opposition rally was due to take place in the capital this Saturday, but organizers have, so far, failed to secure permission from City Hall.

- A possible revision of the Constitution, which local media, citing unnamed Kremlin insiders, had mentioned as a potential focus of the address.

Prior to Putin’s address observers had also speculated that he may deliver some radical proposals, among them tighter measures to silence the opposition and broad structural reforms, but neither made its way into the speech.

Instead, much of the address sounded like a compromise between the expectations of the “angry urbanites” who attended the opposition rallies and those of conservatives in the ruling establishment, said independent political analyst Pavel Salin.

Because of this, however, the address largely failed to go beyond “vague generalities,” said Salin, formerly of the commercial Center for Political Assessment think-tank.

Maria Lipman of the Carnegie Moscow Center said the speech was “tepid” and others agreed with her assessment.

“Putin is always saying nice and true things, with a few exceptions, but the question is whether he has the will or the resources to make them come true,” said Dmitry Oreshkin, a political analyst and a former member of the Kremlin’s human rights council.

Putin projected paternalistic attitudes on topics such as family and morality, and shied away from surprising announcements or controversial issues, such as the Magnitsky Act, in order to appease the public, Lipman said.

“It was a pacifying message: Things are mostly alright now, and will be getting better,” she added. “But it remains to be seen whether it will come to pass.”