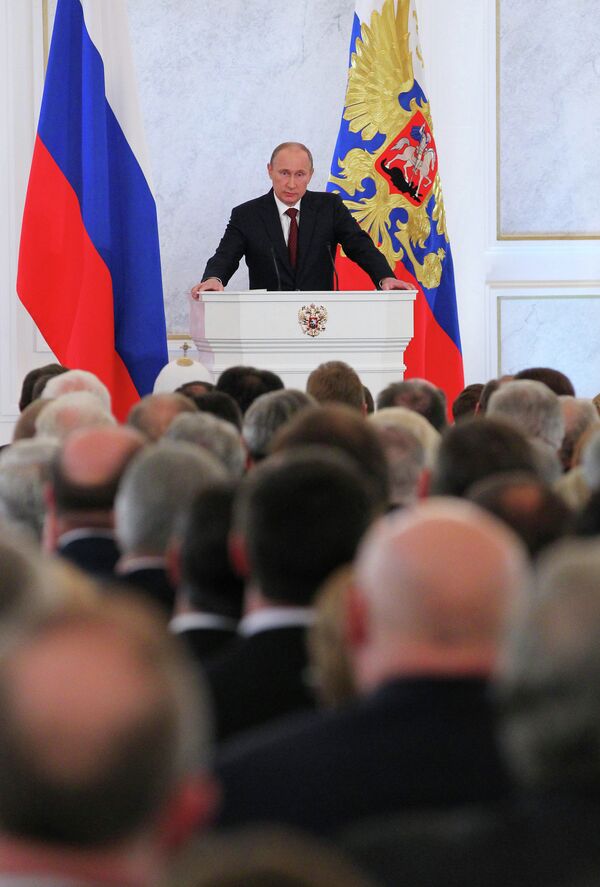 © RIA Novosti . Mikhail Klementiev
/
Go to the photo bank
Subscribe
Russian President Vladimir Putin said Wednesday that a new round of more liberal political legislation, focusing mostly on electoral opportunities, could be put up for consideration in the foreseeable future, but he remained noncommittal.

MOSCOW, December 12 (RIA Novosti) – Russian President Vladimir Putin said Wednesday that a new round of more liberal political legislation, focusing mostly on electoral opportunities, could be put up for consideration in the foreseeable future, but he remained noncommittal.

The authorities are ready to consider once again allowing electoral blocs, a way for smaller parties to combine forces in elections that was abolished in 2007, Putin said in his first state-of-the-nation address since returning to the presidency earlier this year. But the matter should be discussed further, he added.

The same goes for the reintroduction of a mixed parliament, he said. Until 2007, Russia elected half its federal lawmakers by voting for parties – which then sent representatives to parliament based on lists made public in advance – and half from so-called single-mandate districts, where voters cast ballots for individuals rather than parties. This had allowed independent candidates to enter the legislature, but the system was abandoned in favor of one in which all voting was for party lists.

The government must also ensure that all political parties are provided equal access to the media, Putin said.

The number of parties in Russia swelled from seven to 48 after a recent rollback of strict rules for party registration instituted under Putin in the mid-2000s. The rollback, introduced last spring along with the reintroduction of gubernatorial elections, was prompted by mass opposition rallies in the capital, most analysts said at the time.

Putin also proposed drafting a political code of fair play and insisted that people with a criminal record should not be allowed into politics. He likewise noted that the parliamentary opposition, along with the ruling party, should be allowed to field candidates for the Audit Chamber.

He also stressed that “more attention should be given to direct democracy,” including the right of citizens to propose legislation by various means, including the internet.

“Democracy is not just the chance to choose those in power, but to constantly oversee them and evaluate the results of their work,” he said.