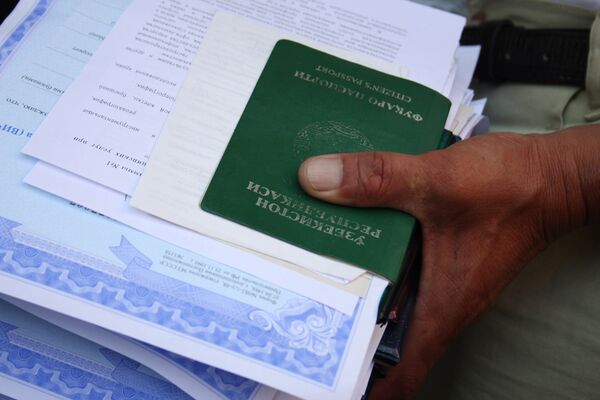 In his first state of the nation address since reelection in March, Putin called for an end to the practise of allowing CIS citizens to enter Russian territory with only their national (internal) passports.

“It is almost impossible to secure migration control in the conditions where citizens of other countries use their national passports,” Putin said.

Most former Soviet republics, including Russia, retain the internal passport, which in the USSR functioned as an ID card, and record of place of registration and other important information.

He offered concessions, however, for states that join the Customs Union, the recently-formed free-trade zone of Belarus, Kazakhstan and Russia.

Earlier this week Putin defended moves toward post-Soviet integration such as the Customs Union, describing it as a “natural process” driven by mutual economic interests. Russia has been calling for more CIS countries to join the union, a process regarded with concern by Washington.

US Secretary of State Hillary Clinton criticized the new process of post-Soviet integration earlier this month, in an article published by the Financial Times. “It’s going to be called a customs union, it will be called Eurasian Union and all of that. But let’s make no mistake about it,” Clinton wrote, branding the move as “re-Sovietisation.”

Immigration from the post-Soviet space remains a contentious issue in Russia, with many ordinary Russian citizens resenting what they see as an uncontrolled influx of foreigners taking their jobs away. But the business community sees the inflow of workers as essential, as the falling population has driven down the labor force to levels where shortages exist in many trades and unemployment is at a record post-Soviet low.

Putin also asked the Cabinet to submit proposals for development of distance learning of the Russian language outside the country.

"It is important to support schools in CIS states and other countries that teach Russia, help their teachers, provide textbooks and finance," Putin said.

Between 11 and 14 million labor migrants a year come to Russia, 77 percent of them from CIS countries (20 percent from Ukraine, 15.6 percent from Uzbekistan and 11 percent from Kazakhstan), Federal Migration Service (FMS) Head Konstantin Romodanovsky said in October.

The number of illegal migrants in Russia stands between three and five million ­– most of them from the former Soviet states, the FMS says.

Putin acknowledged Russia needs an inflow of workers. “It needs smart, educated, hardworking people ­– who don’t want just to earn some money and go away ­– but want to move to Russia, settle here and consider Russia as their homeland,” Putin said.

He also called on the State Duma to push forward amendments toughening punishment for illegal migration and violations of the residency registration rules.