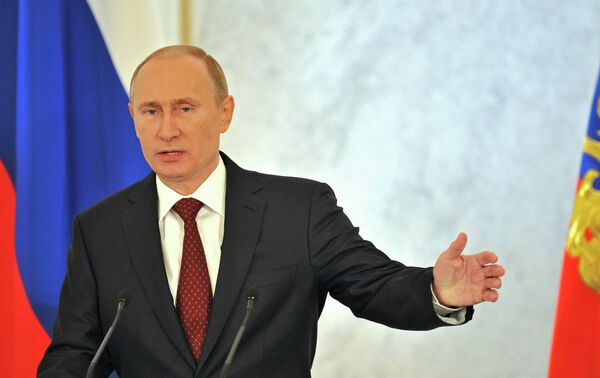 “Direct or indirect interference from outside in our internal political processes is unacceptable,” he said. Someone “who receives money from abroad for his political activity, and in doing so certainly serves other [countries’] national interests, cannot be a politician in the Russian Federation.”

With this, Putin reiterated concerns over foreign meddling in Russian politics that have been particularly acute since the outbreak of mass public protests late last year.

At the time, Putin, then prime minister, made international headlines for claiming the street protests had been funded by the US State Department, a charge Washington has denied.

A current high-profile criminal case against one of the protest leaders involves accusations that he received funding to overthrow the Russian government from a Georgian politician. (All the accused have also denied wrongdoing.)

Putin asserted that, in politics, Russia has no option but democracy, but emphasized that the country has “its own traditions of popular self-rule,” and Russian democracy does not mean “the implementation of standards imposed on us from outside.”

These comments come on the heels of controversial legislation requiring politically oriented nongovernmental organizations (NGOs) in Russia to register as “foreign agents” – a law criticized by activists and human rights workers as an attempt to stigmatize certain organizations and stifle dissent.

In an apparent reference to Russia’s fragmented opposition movement, Putin said that “a civilized dialogue is possible,” but only with those political forces that articulate their demands in an "equally civilized" way, in keeping with the law.

This comment seemed to refer to a series of criminal cases currently underway against opposition activists – including firebrand leftist leader Sergei Udaltsov – for alleged involvement in “mass rioting” and other illegal activities.

Putin added that political modernization is necessary, but that “paying … for the thirst for change with the destruction of the state is unacceptable.”