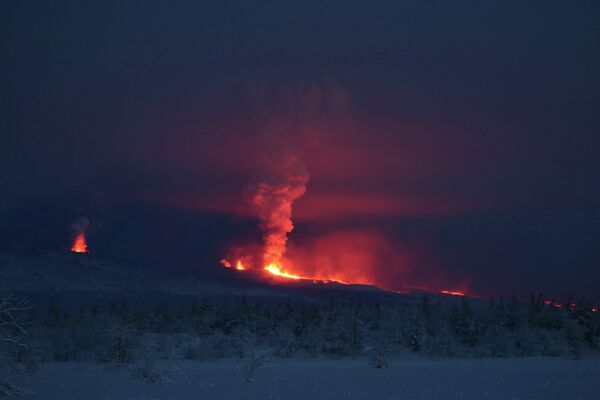 The 3,085-meter Plosky Tolbachik, which is part of a volcanic complex located 343 kilometers from the region's capital of Petropavlovsk-Kamchatsky, erupted on November 27 for the first time in 36 years.

“This year’s eruption is very powerful. During the Great Tolbachik Fissure Eruption in 1975, the volcano spilled on average 40 cubic meters of magma per second while at present its ‘productivity’ is about 400 cubic meters or 1,200 tons per second,” said Gennady Karpov, a deputy director of the Institute of Volcanology and Seismology under the Russian Academy of Sciences.

The volcano has been spewing lava from two fissures along its southern slope, with upper flow descending 6,000 meters and lower flow – 13,600 meters.

The flow from the upper fissure has almost stopped but could resume at any moment as the volcano continues to produce magma, Karpov said at a meeting with local officials.

“If the activity at the upper fissure resumes, we will face a real danger,” he said, adding that the eruption had been already assigned a Red Code status.

Lava flows spewing from the volcano earlier caused a forest fire and destroyed buildings at two research bases located six miles from the mountain. Volcanic ash fell in nearby communities forcing local residents to take shelter in their homes.

The Plosky Tolbachik erupted 10 times since records began in 1740, with the most notable eruption in 1975, commonly known as The Great Tolbachik Fissure Eruption. Soviet scientists successfully predicted the eruption because it was preceded by a series of earthquakes.

The 1975 eruption dramatically changed the local landscape and became an ecological disaster as the volume of lava and ashes emitted by the Plosky Tolbachik was the largest in recorded history of Kamchatka.

There are more than 150 volcanoes on Kamchatka, 30 of them active.