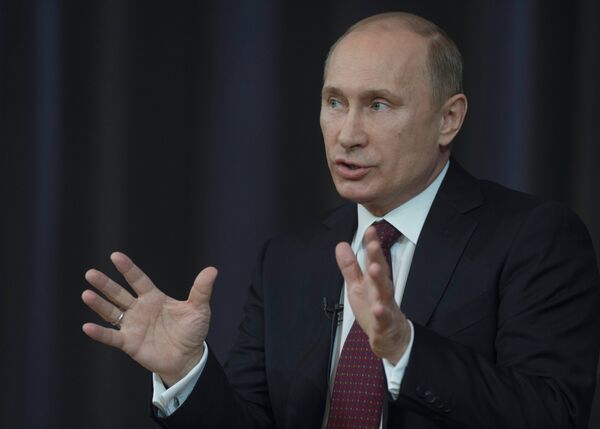 The rejuvenation of general (light utility) aircraft production in Russia should include foreign companies, President Vladimir Putin said on Monday, but must include widespread localization.

MOSCOW, December 10 (RIA Novosti) - The rejuvenation of general (light utility) aircraft production in Russia should include foreign companies, President Vladimir Putin said on Monday, but must include widespread localization.

"We need to revive light aviation, but on our own base with modern technological solutions, using the experience of foreign countries - perhaps it would even be good to bring in their experience, capital and technology - but production should be in Russia," Putin said.

Several foreign companies have made proposals for assembly of their aircraft in Russia, Putin said. "This would not seem to be so bad, but if we go down that route, we will never develop our own skills, which we need as much as the air we breathe," he said.

Putin cited the model of the Russian car industry as an example. "We can and must invite foreign participants in this process along with capital and technology, but with one absolute condition - with growth of local production, and expansion of domestic production on Russian territory."

Several foreign light aircraft manufacturers have held talks with the Russian government in the past few years over possible assembly or license production of their aircraft in Russia, including Czech aircraft builder Evektor (EV-55 twin-turboprop), Canada's Viking Air (Twin Otter 400), Canada's Bombardier (Q400) and US light aircraft maker Maule. So far however, no final deals have been concluded for local production.

Czech company Aircraft Industries plans to produce a modified version of its Let-410 for the Russian market,* the company said in October.

* A previous version of this article incorrectly stated that the modified Let-410 would be built in Russia.