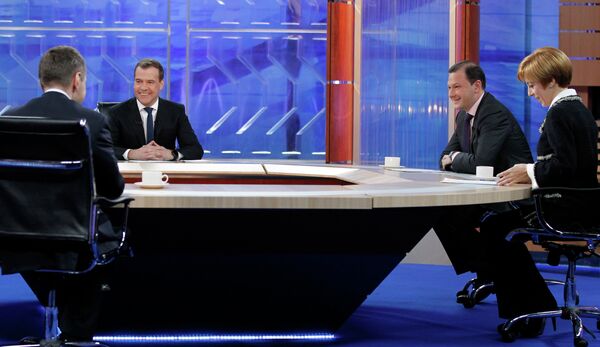 Russian Prime Minister Dmitry Medvedev dismissed suggestions on Friday that a host of controversial new laws were part of a “repressive trend” aimed at stifling political opposition, in a wide-ranging interview aired live on nationwide television and online.

“A political system can be dubbed repressive if a collection of facts points to laws hitting the interests of citizens or political groups,” Medvedev said. “I do not have any reports of this – and neither do you.”

“If they [the laws] were to be used for this, they would need to be amended,” he added.

Opposition activists and human rights groups have alleged that recently adopted laws on NGOs, slander, treason, protests and internet censorship, as well as the jailing of a number of opposition figures, are part of a sustained clampdown on dissent implemented by the government since President Vladimir Putin’s return to the Kremlin in May.

But Medvedev – who both succeeded and preceded Putin as president during his 2008-2012 stint in the Kremlin – said the accusations did not “correspond to real events.”

“All of this is being built up as some repressive trend,” Medvedev said. “But there is no trend.”

Perhaps the most contentious of the new laws obliges NGOs engaged in politics and funded from abroad to label themselves “foreign agents,” triggering a storm of international and domestic criticism, but Medvedev said he saw nothing “wrong” in the term and denied it was a synonym for “spy.”

“Agent means ‘representative,’ and that’s all,” said Medvedev during the interview with journalists from five broadcasters spanning the political gamut, from pro-Kremlin state television to the feisty, independent Dozhd online channel.

Russian human rights groups have reacted furiously to the new law, which they say will discredit them in the eyes of the public.

“The law only concerns those NGOs that engage in politics and receive money from foreign governments,” Medvedev said. “Imagine if an NGO in the US received money from the Russian federal budget – there would be a major outcry across America.”

Medvedev also denied that a new law broadening the definition of treason would be used to target activists and human rights workers who have contact with foreigners.

Medvedev admitted that a law drastically increasing fines for protest-related offenses was a response to the outbreak of mass anti-Kremlin protests, but said it was necessary because the previous law was not sufficient to “guarantee security.”

He declined to comment on mass disorder allegations against three leftist activists, citing the ongoing investigation. The Left Front members, including the movement’s fiery leader, Sergei Udaltsov, were charged after the pro-Kremlin NTV channel aired grainy footage of what it claimed was a meeting between them and an influential Georgian politician plotting to overthrow Putin.

“He should seek to advance his arguments in the framework of the existing laws,” Medvedev said of Udaltsov, who later tweeted: “Thanks for the valuable advice!” Unlike the other two activists, Udaltsov has been freed from custody on a pledge not to leave Moscow. All three face 10 years if found guilty of the charges, which they deny.

Medvedev also came under fire from NTV journalist Alexei Pivovarov, whose colleague in the production of a film documenting anti-Putin protests had his apartment searched early Friday morning by investigators looking for footage of the rallies.

“How can we work … when someone comes to search us at 7 a.m.?” asked Pivovarov.

Medvedev agreed that investigators could have gained access to the footage – much of which has already been posted online – “in another manner” and said the filmmaker involved, Pavel Kostomarov, should lodge a complaint if he feels his rights were violated.

On the fatal shooting of television presenter Kazbek Gekkiyev earlier this week in Russia’s volatile North Caucasus, Medvedev said the attack was evidence that militant groups had begun targeting civilians, as well as police and federal officials.

“I hope that those guilty will be found and either brought to justice or…simply destroyed,” he said.

Medvedev also said he was “satisfied” with a package of political reforms – including relaxed regulations for registering political parties – that he introduced last year while still in the Kremlin in response to protesters’ demands for change.

In particular, he hailed the reintroduction this year of direct gubernatorial elections, which were scrapped by Putin in 2004.

“We received a system in which people, for the first time in eight years, can choose who will administer their region,” he said.

Critics have alleged that the impact of the election reforms has been diluted by the introduction of a so-called “Kremlin filter,” which obliges potential candidates to have their bid approved by five to 10 percent of municipal legislators.

Medvedev said, however, that anyone who had failed to see the value of his reforms was not being "completely honest.”

Medvedev, who also reiterated that he had not ruled out a repeat run for president in the future, lent his support to ex-Defense Minister Anatoly Serdyukov, dismissed last month over a multi-million dollar property scam.

“No one has even brought any charges against him,” he said, praising the former minister’s ability to initiate “long-awaited and very difficult reforms.”

Serdyukov’s dismissal was part of a much-trumpeted anti-corruption campaign that has also involved allegations of graft in the space industry and a major construction project.

But Medvedev denied the campaign was intended to create the illusion of a battle with high-level graft, while doing little in reality to tackle entrenched corruption.

“Nothing of the sort!” he said. “Quantity will, sooner or later, transform into quality.”

He also warned, however, that the fight against corruption should not be used to discredit government officials as a whole.

“The majority of them are normal, respectable people,” he said.

Smoking, Pensions, Babies and the End of the World

Much of Medvedev’s 90-minute interview was taken up by domestic issues, with the focus on pension reforms, a proposed anti-smoking bill and a tightening of drunk-driving laws.

Medvedev also hailed recent statistics pointing to a reversal of catastrophic demographic trends in Russia, which has witnessed a steady decrease in population in the years following the collapse of the Soviet Union.

“For the first time in the entire history of the Russian state we are seeing population growth, Medvedev said. “This is a result of the work of the authorities.”

The first uptick in Russia’s population since 1995 was registered in 2010, according to health officials.

Toward the end of the interview, Medvedev said he did not believe in widespread predictions based on ancient Mayan cosmology that the world would end this December 21.

“I do not believe in the end of the world,” Medvedev said. “At least, not this year.”