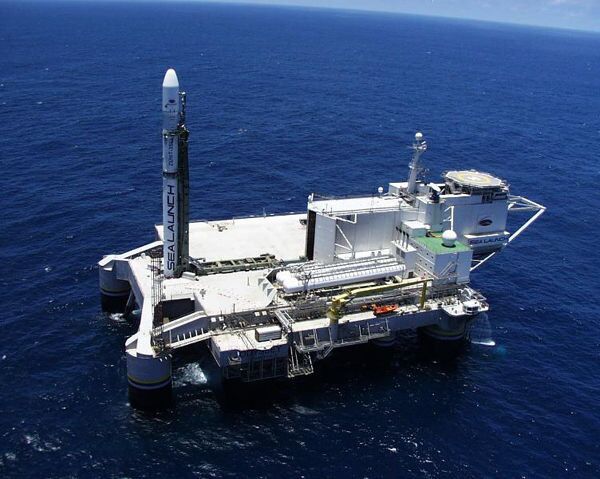 © Photo : S.P. Korolev Rocket and Space Corporation Energia
Subscribe
The Sea Launch consortium has successfully launched its Zenit-3SL carrier rocket with the Eutelsat-70B satellite from the Odyssey Launch Platform in the Pacific Ocean.

MOSCOW, December 4 (RIA Novosti) - The Sea Launch consortium has successfully launched its Zenit-3SL carrier rocket with the Eutelsat-70B satellite from the Odyssey Launch Platform in the Pacific Ocean, Sea Launch reported on Monday.

“The Zenit-3SL rocket carrying the spacecraft lifted off at 12:43:59 Pacific Standard Time [PST] on Monday, December 3rd [20:43:59 GMT] from the launch platform, positioned at 154 degrees West longitude in the Pacific Ocean,” the company said in a statement on its website.

“One hour and six minutes later, the Block DM-SL upper stage inserted the satellite, weighing 5,210 kilograms [11,485 lbs.] and built by Astrium, an EADS company, into geosynchronous transfer orbit, on its way to a final orbital position at 70.5 degrees East longitude,” it said. EADS is an acronym for the European Aeronautic Defense and Space Company.

The launch date was earlier moved 24 hours due to the delayed arrival of the Odyssey platform to the launch site.

According to Sea Launch, the new satellite will provide a range of professional services, including government applications, broadband access and video exchanges in Europe, Africa and Central and Southeast Asia.

Sea Launch carries out rocket launches from floating platform Odyssey at its equatorial launch site in the international waters of the Pacific Ocean.

The Sea Launch system offers the most direct and cost-effective route to geostationary orbit for commercial communications satellites, providing diversity of supply, affordability and flexibility for the industry's satellite operators.

Sea Launch AG was formed in 1995 as a consortium of four companies from Norway, Russia, Ukraine and the United States, and managed by U.S. Boeing. It resumed operations last year after a 30-month hiatus that saw passage through U.S. Chapter 11 bankruptcy, change of ownership from Boeing to Russia’s Energia space company and a move from California to Switzerland.

The company has conducted over 30 launches so far. Two of them resulted in failure and one was abortive.