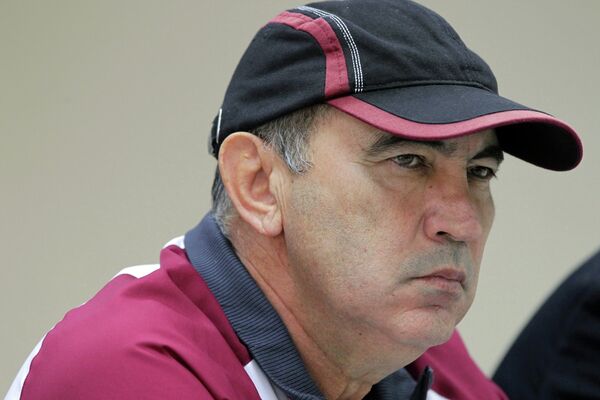 © RIA Novosti . Maxim Bogodvid
/
Go to the photo bank
Subscribe
Long-serving Rubin Kazan coach Kurban Berdyev is keen to extend his 11-year reign at the Tatarstan-based club when his contract comes up for renewal on December 31.

MOSCOW, December 1 (R-Sport) - Long-serving Rubin Kazan coach Kurban Berdyev is keen to extend his 11-year reign at the Tatarstan-based club when his contract comes up for renewal on December 31.

Backed by the region's considerable oil revenues, Berdyev has overseen the transformation of the club from second-tier anonymity to Russian Premier League title-winners in 2008 and 2009.

But the former Turkmenistan national team coach has come in for criticism in recent seasons for failing to sustain that kind of success, despite winning the Cup last year.

And the 60-year-old all but acknowledged the club won't want him around forever.

"It's true my contract is ending," Berdyev said after his side's 3-0 defeat to Dynamo Moscow on Saturday. "Somewhere around December 10 the leadership of the club will decided whether they still want to see me in the post."

"For my part, I would continue in the job with great pleasure. Time will tell," Berdyev added.

Recent form suggests Berdyev still has what it takes, however. Saturday's loss was Rubin's first in six games, and came after last month's 3-0 demolition of Inter Milan to seal the top spot in their Europa League group.

Rubin next travel to Partizan Belgrade on Thursday before hosting Spartak Moscow the following Monday.