Dynamo Cruise to 3-0 Win Over Rubin 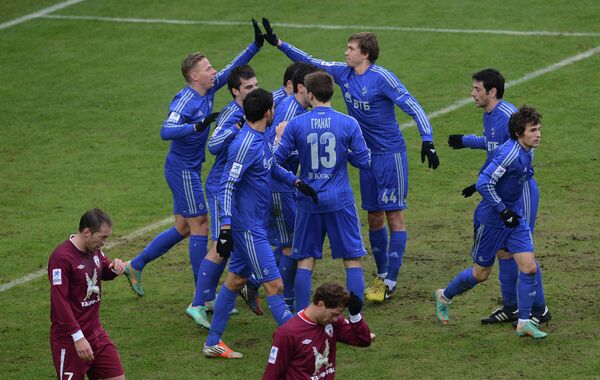 Supporters were banned from Arena Khimki following an incident in which Dynamo goalkeeper Anton Shunin was injured by a flare thrown from the stands earlier this month.

A fourth-straight win lifts Dan Petrescu's side one place to ninth in the table.

The Romanian coach is overseeing a considerable revival of fortunes for the Muscovites, who suffered their worst-ever start to a season this term.

Hungarian winger Balazs Dzsudzsak put Dynamo two up just nine minutes later, lashing into the corner from 18 yards for his fourth of the season.

Ex-Germany international Kevin Kuranyi put a gloss on the scoreline on 75 minutes when he smashed the ball over the head of Rubin stopper Sergei Ryzhikov and into the roof of the net.

Yusupov had the ball in the net late on but it was ruled out for offside.

Former Chelsea fullback Petrescu joined Dynamo from FC Kuban in August, when the club were rock bottom of the league after four defeats and no goals scored.

Since then, he has racked up eight wins in 13 games, a win percentage that eclipses that of champions Zenit St. Petersburg over the course of last season.

For his opposite number Kurban Berdyev, it was a first defeat in six games. Rubin, the 2008 and 2009 champions, had overcome patchy early-season form to win five straight. They remain sixth on 31 points, nine short of CSKA Moscow's lead.

On Friday, Zenit won 4-2 at Spartak Moscow in a match that the hosts finish with nine men. And FC Krasnodar stole a dramatic 2-1 win over local rivals FC Kuban in the fourth minute of injury time.

Sunday sees the match of the weekend, with the table-toppers CSKA welcoming Guus Hiddink's Anzhi Makhachkala.

David Bentley's FC Rostov face Krylya Sovietov later in the day before Mordovia Saransk and Amkar Perm wrap up the round of games on Monday.