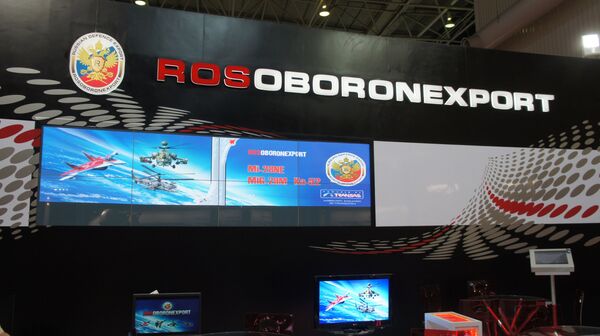 © RIA Novosti . Sergey Safronov
Subscribe
The US Senate unanimously approved a measure that would effectively end the relationship between the Pentagon and Rosoboronexport, Russia’s state run arms export firm which has provided weapons to the Syrian government.

WASHINGTON/MOSCOW, December 1 (RIA Novosti) - Russia reacted Saturday on the US move that would bar the Pentagon from purshasing anything from Russia’s arms export firm by saying that it might impair a "positive" cooperation.

The US Senate unanimously voted Thursday night on the Cornyn amendment, which bars the use of American taxpayer funds to purchase goods – including helicopters to be flown in Afghanistan – from Rosoboronexport state-run arms firm. The company manages almost all of Russia’s weapons sales, including supplies that have gone to both Syria and the US.

Deputy Foreign Minister Sergei Ryabkov warned Saturday that the measure might affect a helicopter deal of a dozen of Mi-17 helicopters worth $171 million for the Afghan military.

“Cooperation between Rosoboronexport and American bodies, including in the so-called [Afghanistan] helicopter project, were very positive, and we would not want this to be impaired by the results of ill-thought and fundamentally harmful mood among some American senators,” Ryabkov said. The helicopter deal was announced by the US and confirmed by Rosobirinexport earlier this year.

“Russia is against policies which propose sanctions or quasi-sanctions regardless of the motives behind it,” he said.

Ryabkov said that any ban on sales of Russian-made helicopters to the US for Afghanistan “would require changes to the law on US defense expenditure already made for the next financial year”.

Rosoboronexport was said to be the only broker for the helicopters, which the Afghan military needs. It’s unclear where the US government will purchase those helicopters if the deal is canceled.

Ryabkov pointed that the impact will be possible to estimate only after the bill passes through all the required votes.

The entire defense authorization bill is scheduled to be voted on by the full Senate next week. While a similar defense appropriations bill, including barring Pentagon dealings with Rosoboronexport, has already passed the US House of Representatives.

“The American taxpayer should not be indirectly subsidizing the mass murder of Syrian civilians, especially when there are perfectly good alternatives for purchasing these same arms through US brokers,” said Republican Sen. John Cornyn in a statement. Cornyn authored the amendment as part of the National Defense Authorization Act.

Through the firm, Russia has reportedly sold more than a billion dollars in weapons to Syria, including four cargo ships full of arms and three dozen combat jets.

“Continuing this robust business relationship with Rosoboronexport would continue to undermine US policy on Syria and US efforts to stand with the Syrian people,” Cornyn said.He and other members of Congress have long advocated an end to the weapons deals with Russia.

In a letter to the Pentagon in March, US lawmakers said they had “grave concerns” about the deals with Rosoboronexport, saying the state-controlled firm provides the Syrian government “with the means to perpetrate widespread and systematic attacks on its own people.”

US President Barack Obama has threatened to veto the defense authorization bill for reasons unrelated to the Russian firm.

000000
Newsfeed
0
New firstOld first
loader
LIVE
Заголовок открываемого материала
Access to the chat has been blocked for violating the rules . You will be able to participate again through:∞. If you do not agree with the blocking, please use the feedback form
The discussion is closed. You can participate in the discussion within 24 hours after the publication of the article.
To participate in the discussion
log in or register
loader
Chats
Заголовок открываемого материала
Worldwide
InternationalEnglishEnglishMundoEspañolSpanish
Europe
DeutschlandDeutschGermanFranceFrançaisFrenchΕλλάδαΕλληνικάGreekItaliaItalianoItalianČeská republikaČeštinaCzechPolskaPolskiPolishСрбиjаСрпскиSerbianLatvijaLatviešuLatvianLietuvaLietuviųLithuanianMoldovaMoldoveneascăMoldavianБеларусьБеларускiBelarusian
Transcaucasia
ԱրմենիաՀայերենArmenianАҧсныАҧсышәалаAbkhazХуссар ИрыстонИронауОssetianსაქართველოქართულიGeorgianAzərbaycanАzərbaycancaAzerbaijani
Middle East
Sputnik عربيArabicArabicTürkiyeTürkçeTurkishSputnik ایرانPersianPersianSputnik افغانستانDariDari
Central Asia
ҚазақстанҚазақ тіліKazakhКыргызстанКыргызчаKyrgyzOʻzbekistonЎзбекчаUzbekТоҷикистонТоҷикӣTajik
East & Southeast Asia
Việt NamTiếng ViệtVietnamese日本日本語Japanese中国中文Chinese
South America
BrasilPortuguêsPortuguese
NewsfeedBreaking
05:52 GMT'All Mouth and No Trousers': Boris Johnson 'Fed Up' With Priti Patel Over Migrant Channel Crossings
05:35 GMTFood Prices in Israel Much Higher Than in EU, Here's Why
04:46 GMTCOVID-19 Live Updates: Israel Closes Borders for Two Weeks Over Omicron Strain Fears
03:42 GMTHis Life, His Rules: Biden Spotted With Mask Down on His Chin While Inside Shop
03:28 GMTSouth Africa Laments Travel Restrictions, Calling Them ‘Punishment’ For ‘Excellent Science’
02:57 GMTGhislaine Maxwell Ready to Take Stand at Trial to 'Save Her Own Life' - Report
01:58 GMTMike Tyson Reveals Marijuana Makes Him 'Different Person' as He Launches New Cannabis Line
01:52 GMTConcerns About Spread of New Covid Strain Rise as Another Migrant Caravan Crosses Into US - Report
01:28 GMTMass Theft Occurs at Best Buy Store in Minnesota, Police Say
00:26 GMTTrump Keeps Mt. Rushmore Sculpture With His Face on It on Display in His Office
00:01 GMTA Glimpse of Hope: Biden Approval Rating Climbs 2 Points, But Still Scores Low on Economy - Poll
YesterdayAbbott Says Texas Is Ready For Possible Cold Winter Due to ‘Dozen Laws’ Signed
YesterdayBarnier Says France Has to 'Be Ruthless With the British' Amid Migrant Crisis - Report
YesterdayEx-Labour Leader Corbyn Slams 'Irrational' Suspension From Party One Year On
YesterdaySudanese Army Repels Attack by Ethiopian Troops With Casualties on Both Sides
YesterdayWHO Says No Need for Panic Over Omicron Coronavirus Strain as Much Remains Unknown
YesterdayBiden's First Christmas Tree Will Reportedly Cost Taxpayers $139,000
YesterdayMemes Flood Twitter After WHO Dubs New Covid Strain Omicron
YesterdayOmicron Coronavirus Strain May Already Be in US, Going to Spread 'All Over', Fauci Says
YesterdayNCT 2021 Walks Into a Dream in New Teaser Video 'Year Dream: Stage 2 - Surfing in Our Dreams'