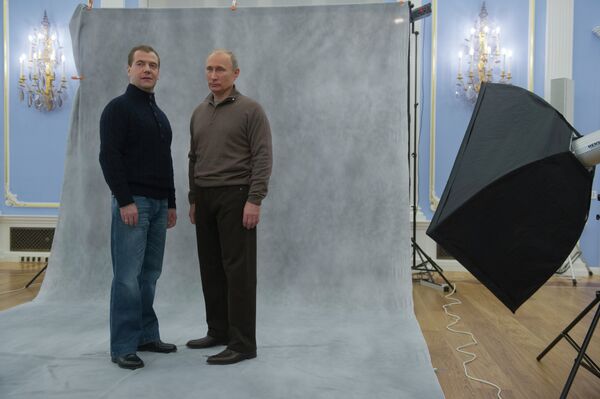 The two men who form Russia’s ruling tandem - President Vladimir Putin and Prime Minister Dmitry Medvedev - have seen their credibility and approval ratings drop over the past 11 months, the Levada polling agency said on Thursday.

Putin’s credibility ratings fell from 41 percent in January to 34 percent in November, and Medvedev’s from 28 percent to 20 percent, respectively.

Putin’s approval ratings fell from 69 percent to 63 percent and Medvedev’s from 64 percent to 54 percent, respectively.

The poll was conducted between November 23-26 using a nationwide sample of 1,596 adults.

Levada Center Director Lev Gudkov sees the drop as part of a long-term downward trend, adding that Putin’s ratings have been steadily declining since autumn 2008.

There are several factors at work, he says, including zero growth in household incomes and the growing divide between well-off urbanites, who are more likely to oppose the ruling establishment, and more conservative segments of society.

Putin’s upcoming news conference and his address to parliament may be designed to improve his ratings, as they have done in the past, but this time around they are only likely to cause greater irritation with the regime, Gudkov said.