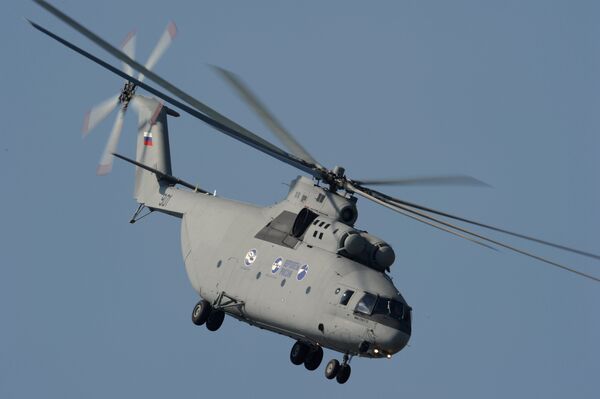 © RIA Novosti . Grigory Sissoev
/
Go to the photo bank
Subscribe
Russia’s state arms exporter Rosoboronexport denied on Wednesday media reports that it had lost tenders on the delivery of heavy-lift helicopters and aerial tankers to the Indian air force.

MOSCOW, November 28 (RIA Novosti) – Russia’s state arms exporter Rosoboronexport denied on Wednesday media reports that it had lost tenders on the delivery of heavy-lift helicopters and aerial tankers to the Indian air force.

“Rosoboronexport denies media speculation about Russia’s loss in both tenders as these reports are false,” the company said in a statement.

“The results of these tenders have not been announced, and any premature speculation on the subject misleads the public and professionals, both in Russia and in India,” the statement said.

Media reports in Russian and Indian media earlier indicated that the Russian upgraded Mi-26T2 Halo heavy-lift helicopter lost to the Boeing Chinook CH-47F, while the Il-78MK-90 aerial tanker lost to Airbus A330 MRTT.

The Indian media cited cost effectiveness and after-sales service as main factors that tilted the scales in favor of the US and European aircraft.

Rosoboronexport insists, however, that the Russian aircraft deserve to win the tenders as “they not only possess unique characteristics, but also satisfy all Indian requirements, including high cost effectiveness.”

Russia’s traditionally strong position on the Indian arms market has been recently undermined by fierce competition with the US and European companies and failures to fulfill several contracts.

Last year Russian arms exporters suffered two painful losses at Indian tenders. Russia did not win the contract to supply 22 helicopters to India, which preferred the US AH-64D Apache to Russia’s Mi-28N.

During the Medium Multi-Role Combat Aircraft (MMRCA) tender announced by the Indian Air Force to replace the aging MiG-21s, the Russian MiG-35 did not even make it to the finals, where the Eurofighter Typhoon twin-engine multirole fighter lost a contract worth at least $10 billion to France’s Dassault Rafale.