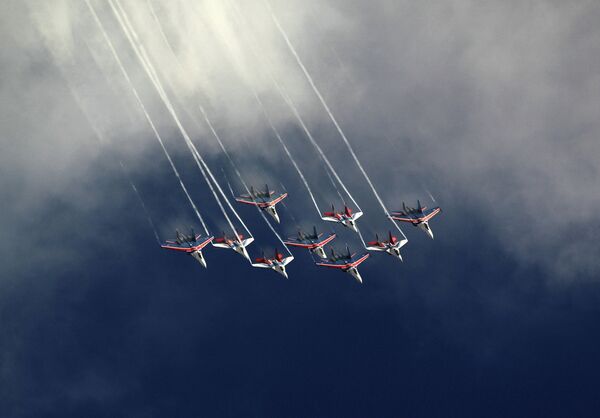 Alisa, a 12-year-old girl from St. Petersburg, wants to be a military pilot. She even asks for career advice on websites for aerobatic teams, where no one has the heart to tell her that the Russian Air Force does not accept girls.

MOSCOW, November 28 (Alexey Eremenko, RIA Novosti) – Alisa, a 12-year-old girl from St. Petersburg, wants to be a military pilot. She even asks for career advice on websites for aerobatic teams, where no one has the heart to tell her that the Russian Air Force does not accept girls.

If it is any consolation, one of Russia's top gun schools, the Zhukovsky Air Force Engineering Academy, for the last three years, has not accepted boys either, as it languishes crippled by a massive reorganization that has been lambasted by many active and retired pilots.

Sometimes even existing opportunities go untapped: the first ever open cosmonaut recruitment drive in Russian history, which wrapped last month, only had some 300 applicants, compared to 6,000-plus at NASA’s most recent drive in 2011.

Military pilots and cosmonauts have been a staple of Russia’s national elite since the Soviet era, but both occupations fell on hard times these past two decades, and their prestige has plummeted.

The most pressing issue – that of underfunding – has been at least partially fixed in recent years by Vladimir Putin’s increasingly tech- and army-conscious administration.

But money alone cannot deliver professional management or a clear strategy, both of which remain lacking in Russian military aviation and, to a lesser extent, the space industry.

As long as these problems persist, public support for the Air Force and space program will falter, despite enthusiasts such as Alisa. That means flying a fighter plane or spaceship will never be as popular as in the days of pre-War aviator Valery Chkalov – Russia’s own Charles Lindbergh – or Yury Gagarin, the first man in space, professionals in both industries said.

“I expect no improvement in the coming years,” Igor Sulim, a former military pilot discharged after he turned whistleblower, told RIA Novosti. “And the public is disappointed by what it sees.”

Yevgeny Fatyanov, who graduated from the Zhukovsky Air Force Engineering Academy, says he has only the best memories about his school, which trains pilots, engineers and other specialists for the Air Force.

But after completing his education in 2002, he went to work as a financier, not an engineer.

“This had to do with poor monetary rewards at the Defense Ministry,” he said carefully, weighing every word to spare his school any criticism.

The situation used to be as bad in the cosmonaut training industry, but things have picked up in the past few years, Sergei Krikalev, the head of the Yury Gagarin Cosmonaut Training Center, told RIA Novosti last week.

(No) Strategy for the Masses

But it is not all about the money: manned spaceflight is in crisis because it has neither clear goals nor a long-term strategy, said Igor Lisov, an expert with Novosti Kosmonavtiki, a respected aerospace industry monthly.

“They’ve been flying [into orbit] for 50 years, but the people don’t see any results from these trips, and so public support for manned spaceflight remains shaky,” Lisov said.

A draft long-term strategy for Russia’s space industry, published by the Federal Space Agency this summer, names manned spaceflight as only the third priority, after commercial satellites and unmanned fundamental research.

Krikalev complained about the low turnout at Russia's first open cosmonaut recruitment drive, which had about 300 applicants and produced eight prospective spacemen.

“The nation’s priorities have changed, it seems. Our new recruits say every kid wants to be a spaceman, but looks like it’s not the case,” Krikalev said at a press conference in Moscow in November.

Only 5 percent of adult Russians actually wanted to grow up to be cosmonauts, with doctors, teachers, truck drivers and aviators all being more popular, according to a study held in 2011 by the Public Opinion Foundation. The poll covered 1,500 respondents and had a margin of error of 3.4 percentage points.

The Reform That No One Liked

With the military, public support is not so urgent an issue: the army remains the country's fourth most trusted institution after the President, the Prime Minister and the Orthodox Christian Church, according to a series of Levada polls between 2009 and 2012.

But it is mired in drawn-out and controversial reforms launched by recently-ousted Defense Minister Anatoly Serdyukov, who earned the unreserved loathing of most military professionals.

The Air Force saw dozens of pilot schools closed and/or reorganized as part of these reforms. The Zhukovsky Academy was merged with the Gagarin Air Force Academy (not to be confused with the Gagarin cosmonaut training center) and moved from Moscow to Voronezh, 500 kilometers south of the capital – skipping three years’ worth of admissions and losing 1,500 staff, including many qualified instructors unwilling to move.

On the plus side, the force is set to get 1,600 new aircraft between 2011 and 2020. It needs them, having lost no fewer than 25 planes to incidents between 2009 and November 2012, most of them blamed on outdated planes or poor pilot training.

Russia's military pilots increased their flying hours to 100 a year per aviator, up from 20 hours a month in 2000-2004, Major Gen. Sergei Dronov, a senior Air Force officer, told Military Press blog in August.

But Russia is still behind Kazakhstan, Armenia and Belarus on flying hours per pilot, said Anatoly Tsyganok, head of the Moscow-based Military Forecasting Center.

The Air Force lacks bases, especially for long-range aviation, and the pilots remain under-skilled, both Tsyganok and Tolboyev said in separate comments.

Even the wage hike had drawbacks, because much of the funding was to be distributed by unit commanders, which fostered intrigue and nepotism, said Dmitry Koposov, a retired military pilot and longtime member of the aerobatic team The Swifts.

Several officers at the Lipetsk Air Base face trial on accusations of extorting 7 million rubles ($225,000) from their pilots. But the base's head was only reshuffled, while pilot Sulim, who broke the story, got the boot in May.

“The public would have no respect for the army as long as it sees such botched reforms,” he added.

A case study is Russia's aerobatic teams, scandal-mired and problem-ridden despite their international recognition.

The head of the Swifts team, Colonel Valery Morozov, was discharged from the force in October on allegations of embezzling some 35,000 rubles ($1,100), which remain to be proven in court. The case prompted an exodus of his subordinates.

In July, the Russian Knights team – the dream job of little Alisa from St. Petersburg – saw its trip to the Farnborough Airshow in Britain scrapped at the last moment due to bureaucratic mishaps that were never adequately explained and dealt a PR blow to Russia's military.

Pilots from both teams have said that they feel ignored and discriminated against by the Defense Ministry. They fly 20-year-old planes that have outlived their useful life, and are not even allowed to paint their helmets or buy their own jumpsuits, said former Swifts member Koposov.

The groups only fly in public several times a year, while their foreign peers perform more than once a week, and their shows are recognized as a vital element of the army’s PR. Britain’s Red Arrows fly 15 to 20 times a month, according to their 2012 schedule.

“The government seems to have no need for aerobatic teams since the mid-1990s,” said Oleg Chernikov, who heads a grassroots group with the self-explanatory name The Revival of the National Aerobatic Teams.

Chernikov's group campaigns for the government to spell out a strategy for aerobatic teams – something that it has not found the time to do since the Soviet Union's demise. The campaign has so far elicited no reaction from the Air Force’s command.

Fly Us to the Moon

Still, some experts believe that things are picking up in both military aviation and the space industry, albeit at a glacial pace.

The Russian Air Force was in crisis long before Serdyukov, along with the rest of the army, and his reforms were a step in the right direction, said Ruslan Pukhov, who heads the Moscow-based Center for Analysis of Stategies and Technologies.

Military education needed to be reformed, and even deprioritizing aerobatic teams was understandable because aerobatics is a very costly practice, he said.

The reform was poorly executed and further discredited by the squabbles between the Defense Minister and the military staff, said whistleblowing pilot Sulim.

“[But] you couldn’t leave the army the way it was, it was 100 percent clear,” said Pukhov.

“I find enough young enthusiasts dreaming to become spacemen at every school I visit,” said Usachov, who gives public lectures.

Manned spaceflight will never go away even if its romantic veneer from the 1960s and 1970s is fading, said Vyacheslav Rodin of the Space Research Institute at the Russian Academy of Sciences.

“If man can fly to the Moon, he will,” Rodin said.

(An earlier version of the story incorrectly said that flying hours for pilots were specified per month instead of per year.)