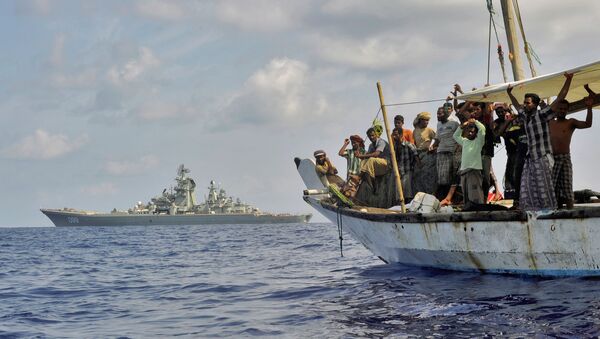 A Spanish admiral was appointed on Tuesday to lead the EU anti-piracy operation in the Gulf of Aden, the Council of the European Union said.

BRUSSELS, November 27 (RIA Novosti) – A Spanish admiral was appointed on Tuesday to lead the EU anti-piracy operation in the Gulf of Aden, the Council of the European Union said.

Operation EU NAVFOR ATALANTA, launched in December 2008, aims to prevent acts of piracy and armed robbery off the Somali coast and in the Indian Ocean.

In March 2012 the Council of the EU extended the EU counter-piracy operation until December 2014.

Including land-based personnel, EU NAVFOR consists of around 1,500 military personnel.

The composition of EU NAVFOR changes constantly due to the frequent rotation of units and varies according to the monsoon seasons in the Indian Ocean. However, it typically comprises 4 – 7 surface warships and 2 – 3 maritime patrol and reconnaissance aircraft.

Additionally, a considerable international military naval presence is now in the area, comprising the Combined Maritime Forces (CMF), NATO and also units from China, India, Japan, Russia, Taiwan and others.

Russian warships have successfully escorted hundreds of commercial vessels from various countries through pirate-infested waters off the Somali coast since 2008, when Russia joined the international anti-piracy mission in the region.

Russia has also called for the creation of a special UN juridical body to try hijackers captured during anti-piracy operations off the Somali coast.

According to latest UN reports, sea pirates carried out 291 attacks and hijackings around the globe in the first 10 months of 2012. They hold at least 293 hostages.

Pirates are most active in coastal waters around Africa, especially in the Gulf of Aden.