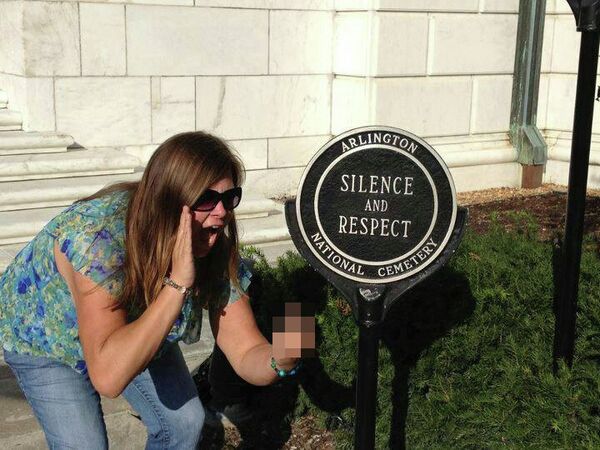 What started out as joke between two American women clowning around in a photo posted on Facebook, quickly turned into a viral volcano that highlights the dangers of so-called digital footprints, when private moments are seen by thousands.

WASHINGTON November 22 (By Sasha Horne for RIA Novosti) What started out as joke between two American women clowning around in a photo posted on Facebook, quickly turned into a viral volcano that highlights the dangers of so-called digital footprints, when private moments are seen by thousands.

“Before social media hit it big, embarrassing pictures and comments could be shared between friends without too much fear that the public would ever see or hear such material,” said James Yu, an employment law and human resources attorney in an opinion piece published earlier this year on the Contra Costa Lawyer website.

And that was exactly the case when Lindsey Stone, 30, posted a photo taken by her co-worker Jamie Schuh, 38, at one of the most solemn places at Arlington National Cemetery, the Tomb of the Unknown Soldier.

In the photo Stone is holding up her middle finger and pretending that she is shouting loudly next to a sign calling for “silence and respect” in the historic military cemetery.

The photo was first posted on Stone’s Facebook page, but it went viral and a Facebook page called “Fire Lindsey Stone” was soon created. The page gained more than 16,000 “likes” and attracted a firestorm of attention both in the US and abroad.

On Wednesday, both women were placed on unpaid leave from their jobs at a home for the disabled in the state of Massachusetts, according to media reports.

“While posted on a public forum, the picture was intended only for our own amusement,” wrote the women in an open letter published Wednesday in the Boston Herald. “We realize it was in incredibly poor taste, and are deeply sorry for the offense we have caused,” the letter continued.

While Stone and Schuh maintain they posted the photo as a joke, their employers and families seemed to find little humor in the situation.

Stone's father, retired ironworker Peter Stone, told a Herald columnist  he was "appalled" when he first saw the photo. "I certainly don't condone anything like that," he said.

A recent survey of parents, taken by the Pew Research Center’s Internet and American Life Project, showed 69 percent of parents with teenage children who frequent the internet were concerned about how their child’s online activities might affect their future.

“Interaction with strangers worries parents. But they are also anxious about the data advertisers are collecting about their children’s online behavior and the broader impact that online activity might have on their child’s reputation,” Pew researchers said.

Additional studies show parents may be justified in their concerns.

According to a study by CareerBuilder, 35 percent of employers decided not to extend job offers after reviewing applicants’ social networking profile.