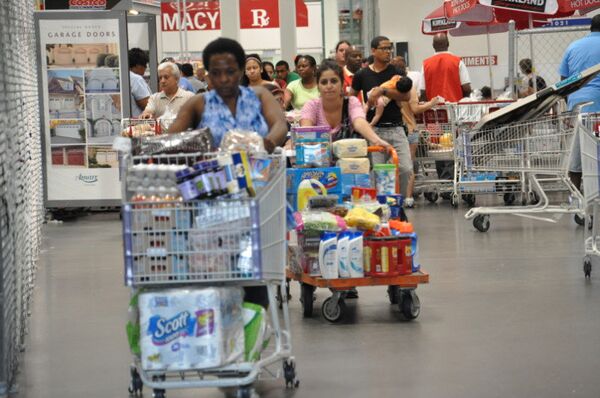 “This weekend retailers will go where they have never gone before with the new tradition I will call, ‘Turkey Day Trot,’” said Marshal Cohen, chief industry analyst at the retail research consultant NPD Group.

He was referring to decisions by top US retailers to launch Thanksgiving/Black Friday sales – events that draw tens of millions of shoppers into stores for huge discounts on popular merchandise – on Thanksgiving itself, a day traditionally reserved for gatherings with family and friends in the home.

Black Friday – the day after Thanksgiving – has long been called the single “busiest shopping day of the year” in the United States, an epithet beloved by marketing professionals but also supported by objective data. It has thus become known as the unofficial US start-date of Christmas-season sales.

“Already there is a tremendous amount of excitement and anticipation surrounding retailers’ Thanksgiving and Black Friday promotions,” said Matthew Shay, President and CEO of the National Retail Federation, an association of retailers.

The Thanksgiving holiday, according to popular historical narrative, was begun in the early part of the 17th century by Pilgrim and Puritan settlers in what was later to become the United States and Canada, as a spiritual expression of gratitude for the autumn harvest and for basic sustenance itself.

But as the commercial dimension of the holiday has ballooned in recent years, so too have tales multiplied of shoppers’ behavior ranging from the impolite and unsavory to the downright violent and dangerous, as have visual images of unruly throngs battling for access to the prized goods.

In recent decades, stores that once remained closed on Friday following the holiday began to open their doors in the hopes of attracting more customers. And more recently, many began to open at the stroke of midnight while anxious bargain-hunters began camping outside well in advance of opening time.

Now the timing for the start of these mega-sales has been moved up still further to include much of Thanksgiving Day itself, casting once-revered holiday traditions to the wind, fanning American obsession with getting and spending and even posing a security risk for the shoppers themselves.

It’s a peculiarly American event that pits shopper against shopper and national chains against small, local businesses in a frenzied contest for dollars and deals that has led to dozens of injuries and deaths in recent years due to trampling, crushing, pepper-spraying and shooting of those unlucky enough to be in the path of onrushing hordes of shoppers.

One man whose wife was critically injured trying to get a discount laptop calls it “America’s Running of the Bulls.”

It’s gotten so bad the federal government is stepping in. The Occupational Safety and Health Administration (OSHA) which enforces workplace safety standards is encouraging retailers to take action to avoid tragedy – like the worker who was trampled to death by a Black Friday mob a few years ago.

Their recommendation includes everything from trained security workers and barricades to an emergency plan.

And shoppers should not be fooled by the holiday greetings and forced smiles on the faces of employees of the big stores that have now decided to be open for business on Thanksgiving. Those employees, say union leaders and other insiders, need the job – but would prefer to spend the holiday with loved ones.

Workers at the giant US retailer Walmart are so angry about plans to open on Thanksgiving night – as well as other conditions they think are unfair – that they’re planning strikes, rallies, and flash mobs designed to paralyze Walmart stores nationwide at the start of the critical holiday season.

Lawyers for the corporate giant even went to court in a bid to obtain an injunction that would force the angry works to stop their protests – but federal labor officials rebuffed their effort.

“Walmart has forgotten about families,” said Larry Gross, the Executive Director of the Coalition for Economic Survival in the US state of California.