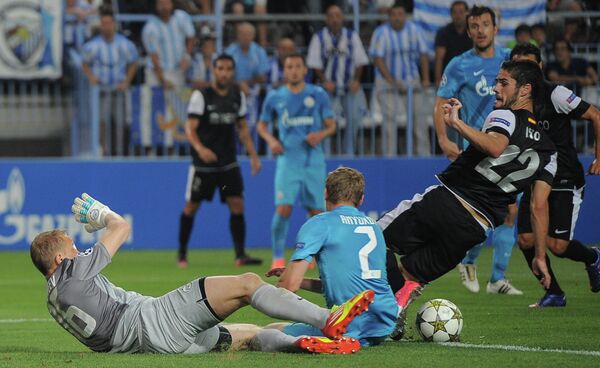 Malaga secured a spot in the Champions League knockout stages Wednesday after a 2-2 draw at Zenit St. Petersburg that leaves the Russians with almost no hope of qualifying.

ST. PETERSBURG, November 21 (R-Sport) -  Malaga secured a spot in the Champions League knockout stages Wednesday after a 2-2 draw at Zenit St. Petersburg that leaves the Russians with almost no hope of qualifying.
A quickfire double in the first nine minutes seemed to have settled the match in Malaga’s favor as Zenit missed a string of chances, typified by Alexander Kerzhakov missing an empty net early in the second half.
Substitute Viktor Faizulin salvaged a point on 84 minutes, scoring from a poor clearance after Zenit midfielder Miguel Danny contrived to miss from a yard out.
Malaga qualify from Group C in their first-ever Champions League campaign, while Zenit must hope AC Milan do not beat Anderlecht later Wednesday and then defeat the Italians away next month.
Diego Buonanotte put Malaga ahead on eight minutes when he picked up a square pass from Seba, jinked right to open up space and slammed a shot past goalkeeper Vyacheslav Malafeev.
Within seconds of the restart Zenit were 2-0 down as Roque Santa Cruz crossed for Seba to score with another powerful finish.
Danny revived his team’s hopes four minutes after the break with his first goal of the year, stroking the ball in off the post after a one-two with Tomas Hubocan.
Zenit mounted an onslaught in search of a vital win, but were let down by wayward shooting and a glaring lack of coordination in attacking moves typified by impressive individual skill, before Faizulin struck to level the score.
Zenit winger Vladimir Bystrov received a straight red card after the final whistle in circumstances that were not immediately clear.
Malaga had arrived with an almost second-string side due to injuries and the decision to leave key players such as Javier Saviola in Spain, but put up a fight until the end.
The Spanish visitors had a lot to thank goalkeeper Willy for as the Argentinian saved his team on several occasions, most notably a fingertip diving save from Hubocan on the verge of half-time.
Hulk appealed unconvincingly for penalties twice in the first-half as Zenit struggled to make their mark before showing greater confidence after the break.
Kerzhakov struggled with composure in front of goal at Euro 2012, and the Russia striker missed Zenit's best chance early in the second half when he rounded the goalkeeper but smacked the ball into the side netting.