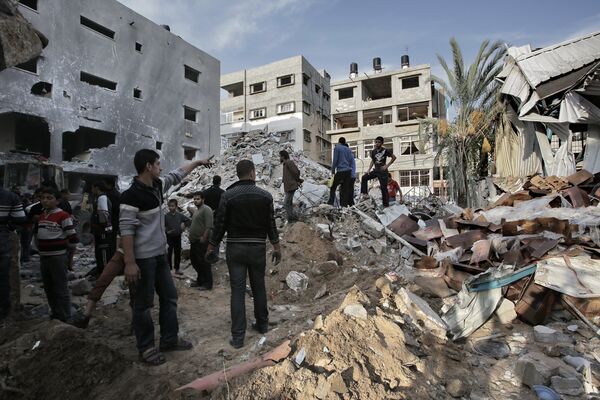 A ceasefire has been achieved between Israel and the Palestinians in the Gaza Strip, starting at 7:00 p.m. GMT, Egyptian Foreign Minister Mohamed Kamel Amr said on Wednesday.

MOSCOW, November 21 (RIA Novosti) – A ceasefire has been achieved between Israel and the Palestinians in the Gaza Strip, starting at 7:00 p.m. GMT, Egyptian Foreign Minister Mohamed Kamel Amr said on Wednesday.

"These efforts ... have resulted in understandings to cease fire and restore calm and halt the bloodshed that the last period has seen," Reuters quoted Amr as saying at a joint news conference with US Secretary of State Hillary Clinton.

That would "provide an opportunity to stabilize the situation and calm it before any more forceful action would be necessary," he said.

At least 18 people were injured when an explosion hit a bus in central Tel Aviv earlier on Wednesday, Israeli police said.

A spokesperson for the Islamist group Hamas said it welcomed the bombing as a "natural response" to the ongoing Israeli bombardment of Gaza, but said it was not behind the attack.

In Israel, politicians including deputy parliamentary speaker said the bombing meant Israel had no choice but to invade Gaza.

Around 140 Palestinians have been killed in Israel's eight-day air and naval attack on Hamas-ruled Gaza, officials say. Gaza’s health ministry says many children are among the Palestinian dead.

Israel says it began its attack on the city of 1.7 million in response to a surge in rocket attacks from Gaza.

Palestinian rockets continued to hurtle toward Israeli towns and cities on Wednesday, but most were knocked down by the sophisticated Iron Dome air defense system. Israel says five people have been killed by Palestinian rockets in the last eight days.

An Israeli Defense Forces spokesman said on Twitter that Hamas members had celebrated on the streets of Gaza as news of the bus bombing broke.

The bombing comes amid frantic negotiations to end the violence.

“The United States strongly condemns this terrorist attack and our thoughts and prayers are with the victims and the people of Israel,” Secretary of State Hillary Clinton said in a statement.

Abbas called on Israel to "halt" its "criminal" attacks on Gaza, after which, he said, Hamas would follow suit.

Israeli Defense Forces said they had attacked Hamas government buildings overnight, as well as over 50 of what a spokesperson described as “terror sites.”

Israel has massed tens of thousands of troops on the border with Gaza, but has said it will give diplomatic efforts a chance before issuing the order to invade. Tel Aviv is demanding the cessation of rocket fire from Gaza as the main condition for a truce.

Israel’s last invasion of Gaza, in 2008-2009, killed 1,400 Palestinians, the majority of them civilians. Thirteen Israelis died in the 22-day-long Operation Cast Lead.

A Haaretz-Dialog poll taken on Sunday indicated that 84% of the Israeli public supports the military campaign, with 12% opposing it. But only 30% would support a ground offensive in Gaza, the pollster reported.