US Drone Submarine-Hunters to Patrol Oceans 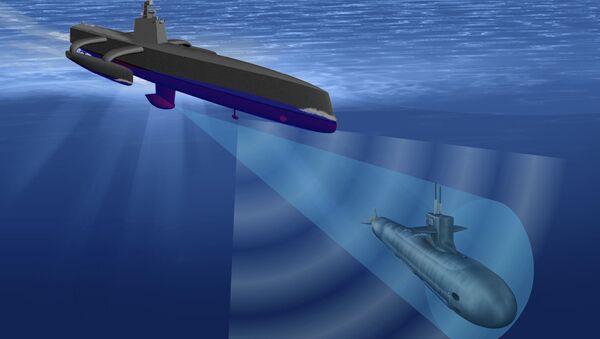 We know about unmanned drone aircraft in the skies, but how about drone subs patrolling the oceans?

WASHINGTON, November 21 (RIA Novosti) – We know about unmanned drone aircraft in the skies, but how about drone subs patrolling the oceans?

The United States Department of Defense is in the initial stages of creating unmanned drone submarines that will navigate the oceans, tracking and following enemy subs for months at a time.

The Defense Advanced Research Projects Agency (DARPA), which is responsible for developing new military technologies, started the project because “the growing number of adversaries able to build and operate quiet diesel electric submarines is a national security threat that affects US and friendly naval operations around the world,” according to a statement on the DARPA website.

Normally, anti-submarine warfare has been conducted by US Navy captains at the helm of ships, but humans will never board these drones, also known as a “Continuous Trail Autonomous Vessels,” according to Discovery News.

The subs will be able to patrol the US coastline for up to 80 days at a time covering thousands of kilometers using non-conventional sensor technologies that “achieve robust continuous track of the quietest submarine targets over their entire operating envelope,” DARPA stated on its website.

The vessel’s main task will be to patrol the waters for enemy submarines and then chase them away if located. The sub will also gather information deemed necessary by the US government, which will then be sent to US naval commanders up above on land, according to Discovery News.

The only time humans are needed to operate the unarmed drones will be to navigate the robot subs through crowded harbors.

In August, DARPA awarded a $58 million contract to Science Applications International Corporation (SAIC), which is now responsible for designing, constructing and creating a prototype of the vessel.