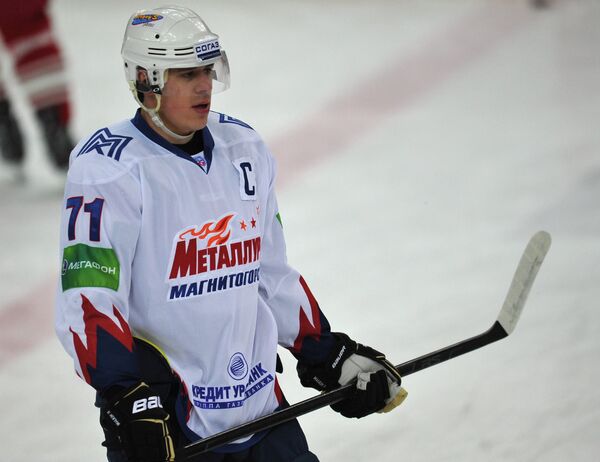 NHL stars Evgeni Malkin and Sergei Gonchar combined for a goal but saw their lockout team Metallurg Magnitogorsk defeated 2-1 by Avangard Omsk on home ice in the KHL on Wednesday.

MOSCOW, November 21 (R-Sport) - NHL stars Evgeni Malkin and Sergei Gonchar combined for a goal but saw their lockout team Metallurg Magnitogorsk defeated 2-1 by Avangard Omsk on home ice in the KHL on Wednesday.

Last year's Gagarin Cup runner-up Avangard leapfrogs Metallurg to go second in the Eastern Conference, with Malkin’s men a place behind after losing three of their last four games.

The visitors led from Alexander Frolov’s second minute goal, extending their lead through Igor Volkov in the second period before Malkin set up Gonchar’s third goal of the season as the Ottawa Senators defenseman made it a one-goal game again. Malkin's assist was his 22nd in as many KHL games and took his points tally to 32.

The course of the game could have been very different were it not for two missed penalty shots, one for Metallurg’s Enver Lisin at the start of the second period and one for Avangard’s Tomas Zaborsky in the third.

Elsewhere, Eastern Conference leader Traktor Chelyabinsk remains top despite a surprise 3-0 defeat to outsider Barys Astana at home. Kazakhstan's Barys is eighth in the East after the win.

Barys went into the game with just one win in their last seven, but made the best of their meager chances to win despite being outshot 28-14 as goaltender Teemu Lassila recorded his third shutout of the season.

Ex-New York Rangers wing Nigel Dawes was among the scorers for Barys, with Roman Starchenko and Dmitry Upper also finding the target.

Aggressive Salavat Yulaev Ufa handed out a 4-1 thrashing to Spartak Moscow as the hosts outshot the visitors 39-24 on their way to victory.

Salavat Yulaev rises to sixth in the Eastern Conference, while Spartak stays 13th in the West after an 11th defeat in 13 games.

Yugra stays 10th in the East, with Avtomobilist stuck in last place in the same conference.