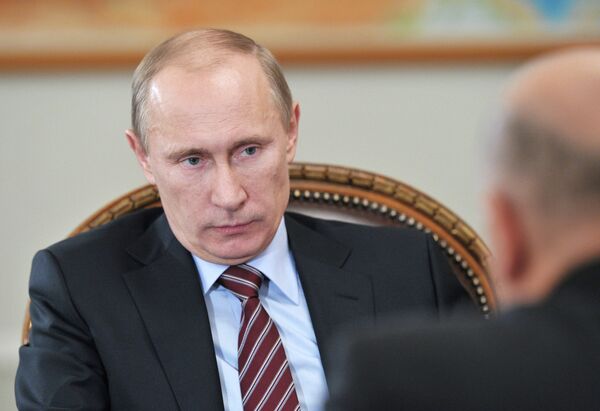 Russia is unlikely to reap quick benefits from its accession to the World Trade Organization (WTO) amid the intensifying gloom engulfing the global economy, President Vladimir Putin said on Wednesday.

“The current situation on global markets is characterized by low demand and low investment activity and therefore there is a risk that we’ll be unable to get quick positive results from our accession to the WTO,” Putin told a National Security Council meeting.

Critics have claimed Russia’s WTO accession is detrimental to the country’s national sovereignty and security and could ruin entire sectors of the domestic economy such as agriculture and the motor industry.

“Nevertheless, crisis trends on global markets have intensified risks related to the obligations we assumed, primarily our commitments related to lowering import duties on some goods,” Putin said.

The Russian government has taken all necessary measures to enable domestic companies to adapt to new conditions following the country’s entry into the world trade club. However, there were whole sectors that could face problems in the wake of the WTO accession, first of all, livestock breeding, farm machinery manufacture, car-making and the food industry, Putin said.

Russia’s accession to the WTO may also create additional difficulties for Russian regions with a weakly diversified economy as crisis factors persist in the global economy, Putin said, adding the Russian government would take measures to minimize risk and negative implications and protect Russian citizens’ interests.

Putin also instructed the government to elaborate measures aimed at preventing unemployment growth in the wake of entry into the world trade club.

Russia’s unemployment rate has been consistently falling in the past decade, measuring only 8.4 percent in the crisis year 2009 and currently standing at 5.2 percent, the president said.

“We need to maintain these positive trends and prevent a fall in the employment rate in single-industry towns and in the regions where large enterprises of the sectors in the ’risk group’ are concentrated,” Putin said.