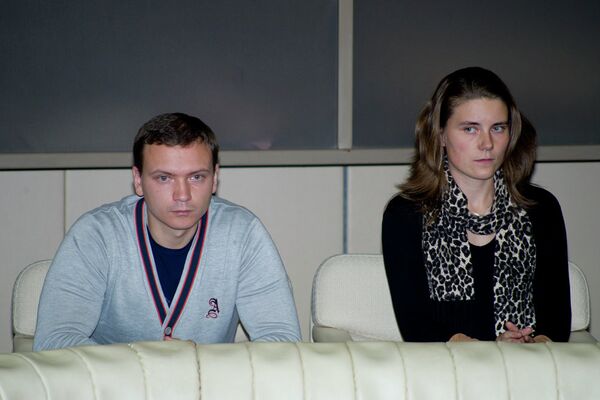 Anna Kikina, 28, became the second active female cosmonaut trainee in Russia after Yelena Serova, who is set to fly to the International Space Station (ISS) in 2014.

All eight hopefuls were presented to the public for the first time at a press conference in Moscow, though their formal enrollment in the program took place in late October.

Kikina, a native of Novosibirsk in western Siberia, was also the only one of the eight recruits for whom, by her own admission, going to space was not a childhood dream.

“I decided to try out when I found out an ordinary person now has a chance of going to space,” Kikina, an engineer, said at the press conference.

Admission to the ranks of spacemen in Russia used to be limited to military pilots and engineers employed in the space industry, as well as a small trickle of scientists from the Academy of Sciences and professional medics.

But in 2011, the Federal Space Agency expanded admission rules to include all able-bodied Russians with a higher education.

The agency received about 300 applications, which is 20 times less than the latest NASA recruitment drive, held in 2010. None of the eight graduates had a humanities education, though one professional television actor made it to the final stage of selection.

“But it was a sociological experiment too, to see how priorities have shifted in [Russian] society,” said Krikalev, a record holder for the combined number of days spent in orbit (803).

Not all of the eight are guaranteed a slot on a cosmonaut squad: some may be dropped in the current two-year general training stage. The entire preparation course has three stages and takes six or seven years, which means the recruits would not have a chance to fly into space until 2018 – two years before the ISS’s current expiration date, which, however, may be pushed back to 2028.

The recruits are aged between 28 and 32. Two used to work in the space industry prior to enrollment, one was a military pilot and the rest were employed in various other industries, including construction and computer programming.

The Soviet and Russian space programs only had 17 female participants, three of whom managed to go to space. NASA sent 45 women into orbit between 1983 and 2012.

Krikalev denied earlier any gender discrimination, putting the lack of female cosmonauts in Russia down to smaller female presence in military aviation and space industry, the traditional talent pool for space programs.

Krikalev did not speculate on possible missions for the current generation of recruits. Some of the recruits said they hoped to be part of the next breakthrough in manned spaceflight, possibly flying to the Moon or Mars.

Russian Deputy Prime Minister Dmitry Rogozin, who oversees defense and space industries, said in September that Russia’s next goal in space should be a permanent Moon base. He gave no timeframe for the project.