Israel Continues to Pound Gaza as Ceasefire Talks Drag On 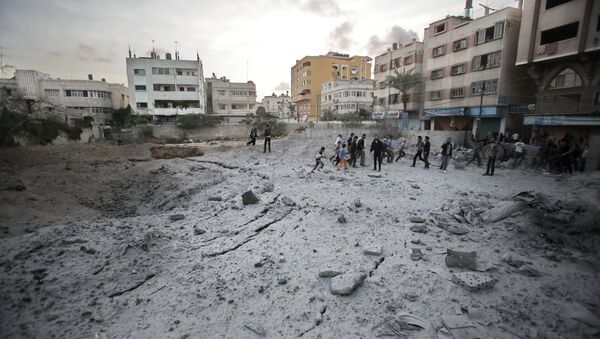 © Sputnik / Andrei Stenin
/
Go to the photo bank
Subscribe
Israeli forces launched more airstrikes overnight on Gaza, bringing the death toll in the Palestinian enclave to over 130, as efforts to secure a ceasefire continued.

MOSCOW/GAZA, November 21 (RIA Novosti) – Israeli forces launched more airstrikes overnight on Gaza, bringing the death toll in the Palestinian enclave to over 130, as efforts to secure a ceasefire continued.

This latest bombardment of the coastal city, which has a population of over 1.7 million, came after Egypt and the Hamas Islamist group that rules Gaza had announced a truce would come into force from 7pm GMT on Tuesday. Israeli officials later denied a deal was in place.

The death toll in the eight-day conflict stands at 136 Palestinians and five Israelis, officials say. Gaza’s health ministry says many children are among the Palestinian dead.

Fifteen people were also reported to have been injured, three seriously, when a bomb exploded on a bus in the Israeli capital of Tel Aviv, Israeli media said. Israeli police said the blast was a terrorist attack.

Palestinian rockets fired from Gaza continued to hurtle toward Israeli towns and cities on Wednesday, but most were knocked down by the sophisticated Iron Dome air defense system. Israel says more than 800 rockets have been fired from Gaza into Israel over the past week.

US Secretary of State Hillary Clinton met Israeli Prime Minister Benjamin Netanyahu after flying into Jerusalem late on Tuesday as frantic negotiations to end the now eight-day assault on the densely-populated enclave went on behind the scenes. Clinton is due to visit the West Bank and Cairo later today.

“It is essential to de-escalate the situation in Gaza,” said ahead of talks with Netanyahu. “The rocket attacks from terrorist organizations inside Gaza on Israeli cities and towns must end and a broader calm be restored.”

But Netanyahu, speaking before his meeting with Clinton, said that while Israel would prefer to see a “diplomatic solution” to he crisis, it reserved the right to take whatever action it deemed necessary to halt the Palestinian rocket attacks that provoked its onslaught.

"If there is a possibility of achieving a long-term solution to this problem with diplomatic means, we prefer that,” he said. “But if not, I'm sure you understand that Israel will have to take whatever action is necessary to defend its people.”

Abbas called on Israel to "halt" its attacks on Gaza, after which, he said, Hamas would follow suit.

Israeli Defense Forces said they had attacked Hamas government buildings overnight, as well as over 50 of what a spokesperson described as “terror sites.”

Israel has massed tens of thousands of troops on the border with Gaza, but has said it will give diplomatic efforts a chance before issuing the order to invade. Tel Aviv is demanding the cessation of rocket fire from Gaza as the main condition for a truce.

Israel’s last invasion of Gaza, in 2008-2009, killed 1,400 Palestinians, the majority of them civilians. Thirteen Israelis died in the 22-day-long Operation Cast Lead.

A Haaretz-Dialog poll taken on Sunday indicated that 84% of the Israeli public supports the military campaign, with 12% opposing it. But only 30% would support a ground offensive in Gaza, the pollster reported.

US President Barack Obama reiterated on Sunday Washington’s insistence that Israel has the right to self-defense.

"There's no country on earth that would tolerate missiles raining down on its citizens from outside its borders... we are fully supportive of Israel's right to defend itself," said Obama.

But ordinary people in Gaza have been scornful of Obama’s comments.

“Since when does the occupier have the right to defend itself from the occupied?” said north Gaza resident Sameh Alborai earlier this week. “Many people here believe Gaza is being attacked because of the Israeli elections that are coming up. Israel has an internal conflict and, like always in these situations, they are targeting Gaza.”

Netanyahu dismissed the accusations: “We are defending ourselves,” he said last week.

But Israeli Foreign Minister Avigdor Lieberman made a clear connection between the upcoming polls and the prospects of a ground invasion in frank comments published late on Tuesday.

“My approach is simple,” he told Israeli media. “If our troops enter Gaza, we will have to see it through to the end. This is not a decision he government can take with two months ahead of elections. It should be left for the new cabinet.”