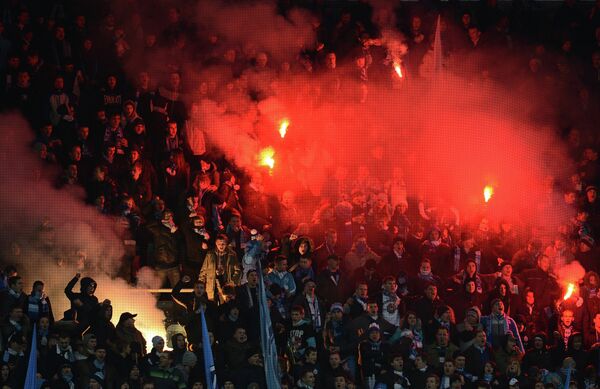 © RIA Novosti . Alexey Filoppov
/
Go to the mediabank
Subscribe
International
India
Africa
A controversial new law aimed at stamping out football hooliganism in Russia should be rushed through to stop thugs ruining the 2018 World Cup in the country, Sports Minister Vitaly Mutko told R-Sport on Monday.

MOSCOW, November 19 (R-Sport) - A controversial new law aimed at stamping out football hooliganism in Russia should be rushed through to stop thugs ruining the 2018 World Cup in the country, Sports Minister Vitaly Mutko told R-Sport on Monday.

The issue was highlighted Saturday when Dynamo Moscow goalkeeper Anton Shunin suffered eye injuries after a smoke bomb exploded near him during a match against Zenit St. Petersburg.

“It’s particularly important that this system is brought in as soon as possible because Russia has been entrusted with the very biggest sports events in the coming years, including the football World Cup in 2018,” Mutko said.

“Football hooligans should not get even the slightest chance to get into these matches, and they won’t get it. On our side, the security system will be reconfigured and FIFA will handle the ticket sales.”

The bill is near complete and needs just Prime Minister Dmitry Medvedev’s signature before it is submitted to parliament, the vice-speaker of Russia’s lower house said Monday, but details of the bill’s exact contents remain vague.

With attendances at Russian football matches among the lowest for top European leagues, some have voiced concerns the law could scare away the relatively few remaining fans.

Mutko’s remarks suggest that lengthy bans from major sports events could be part of a package of tougher punishments for hooligans.

He also suggested that his ministry was still able to make amendments to the draft before it reaches parliament.

“In accordance with instructions from the head of government of Russia [Medvedev], the Sports Ministry is working on a package of proposals which will ensure public order in the stands,” he said.

“We have already provided for many of these in the draft.”

Russia was awarded the World Cup in 2010, beating joint bids from the Benelux countries, Spain and Portugal and a bid from England.

At the time, concerns were raised about hooliganism, given the regular mass arrests at Russian league games and comparatively frequent occurrences of racist abuse of players and fans.

The topic was put in the spotlight again in June when a group of marching Russian fans fought running battles with Polish supporters and police in Warsaw during Euro 2012 and beat up a steward at a match.