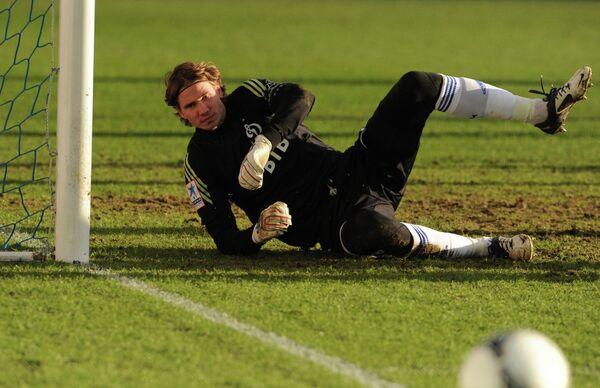 © RIA Novosti . Vladimir Fedorenko
/
Go to the photo bank
Subscribe
Dynamo Moscow Anton Shunin was taken to hospital Saturday with an eye injury after a pyrotechnic thrown from the stands exploded in his face, the club's team doctor said.

MOSCOW, November 17 (R-Sport) - Dynamo Moscow Anton Shunin was taken to hospital Saturday with an eye injury after a pyrotechnic thrown from the stands exploded in his face, the club's team doctor said.

Dynamo’s home game against Zenit St. Petersburg was called off after 36 minutes when a smoke bomb landed near Shunin and he collapsed to the ground clutching his face.

“Something fell, I looked down and then the firecracker exploded in my face,” he said on Dynamo’s Twitter feed.

“I’ve got problems with my vision and hearing. I’m going to hospital for an examination.”

Dynamo doctor Alexander Rezelov said: “Anton has received a burn to the cornea, one eye sees poorly,” on the team Twitter feed, while teammate Christian Noboa said Shunin was “in shock.”

Referee Alexei Nikolaev led the players off after a discussion with the coaches of both teams, with Dynamo leading 1-0 thanks to a Vladimir Granat goal.

Russian Premier League executive director Sergei Cheban said it was too early to say what the repurcussions would be.

"A football pitch isn't a warzone," he said in televised comments, adding that the FA would decide the winner. "It's the prerogative of the disciplinary committee and they'll make a decision."

It is unclear what action the FA might take: It is possible Dynamo will be awarded the win if Zenit fans are found to have transgressed.

Article No. 32.2 of the FA's disciplinary code stipulates that "the club playing away from home bears responsibility ... for all breaches by spectators included in its support group."

The following article states that any supporter located in the away sector at the stadium will be considered part of this group unless proven otherwise.

Rival fans scuffled at a Moscow train station ahead of the game. No injuries or arrests were reported.

The Russian government is currently trying to push through legislation aimed at stamping out football hooliganism and Cheban said the incident would be sure to become a talking point in relation to the bill.

The last Russian match to be called off due to hooliganism was Dynamo's Russian Cup clash with Torpedo Moscow in September. That game was abandoned due to flares being thrown onto the pitch.

Torpedo, playing at home, were handed a 3-0 loss by default, and ordered to play the next three home games behind closed doors, and both clubs received small fines.