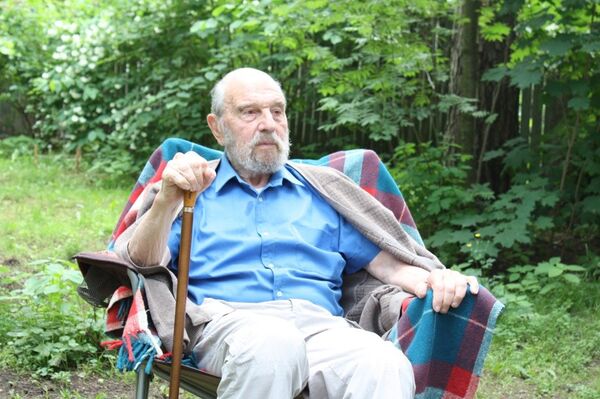 “You and your colleagues have made a big contribution to preserving peace, ensuring security and strategic parity,” the congratulatory message read.

Zvezda TV has scheduled a special documentary about Blake to mark the occasion.

“Viewers will have the chance to watch never-before-seen footage, shot in London and Berlin, in places where the legendary spy worked,” spokesman for Russia’s Foreign Intelligence Service (SVR) Sergei Ivanov told RIA Novosti on Friday.

Blake retains a keen interest in events in Russia and the world, “his wife reads the newspaper to him, and also the latest books,” Ivanov added.

He remains a sought-after figure among Russian and international journalists, however, due to health reasons has stayed out of the public eye in recent years. “But he loves going for walks near his home, just outside Moscow,” Ivanov said.

George Blake was born on November 11, 1922 in Rotterdam. During the Nazi occupation his mother and sister fled to England. George, who had just turned 17, stayed behind to fight with the Resistance.

“My youth was all about the Second World War and the horrors of the occupation. On May 10, 1940 Nazi bombers carried out a barbaric attack on Rotterdam. The city was engulfed in fire and smoke, 31,000 buildings were destroyed,” Blake recalled.

In 1942, George decided to head for England, to continue fighting the Nazis. He crossed Nazi-occupied France under a false passport and arrived in England, where he volunteered for the British Navy the following year.

Two years later he was transferred to the Dutch section of British intelligence. After the Nazi regime capitulated, he traveled to Holland to re-build connections with the British network of spies in the country.

Not long after peace was declared, Britain’s intelligence and security services re-focused their activities on a new enemy: the Soviet Union. Blake was sent to Hamburg to gather information about Soviet forces in Germany. It was there that his interest in the Russian language began to develop.

When his senior officers heard he was teaching himself Russian, they organized lessons for him: intending to use him in operations against the Soviet Union.

In October 1948 Blake was transferred to the SIS (MI6) station in Seoul. He was charged with gathering information about the Soviet Far East, Primorye, Siberia and Manchuria, but was captured by the North Korean forces when the Korean War broke out in 1950, and became a Communist during his three years in captivity.

In 1953 he returned to London, where he continued to work at SIS HQ. He was appointed Deputy Director of Y Section, then responsible for running communications interception operations.

For the Soviet Union, Blake was undeniably a key asset.

In December 1953 a secret meeting took place between SIS and the CIA in London. A decision was taken to build a tunnel-based listening post to eavesdrop on Soviet positions in Germany. Blake let the Soviet Union know about the nascent operation, and Moscow used its intelligence advantage to feed disinformation back to Britain.

In 1956 the Soviet Union revealed the existence of the tunnel and operation Stopwatch/Gold, to great political effect.

Blake’s subsequent appointment to a special unit working with business ties between the UK and the Soviet Union would suggest that his colleagues did not suspect him of being anything other than a loyal British subject serving his country.

But when Polish spy Mikhail Goleniewski defected to the West in 1961, he named George Blake as a Soviet mole in SIS. Blake, who was then being taught Arabic at a secret intelligence center, was called in for questioning, put on trial, and sentenced to 42 years in prison.

He only served a fraction of this time. He escaped from prison with the help of several sympathizers – jumping down a seven-meter-wall in the process, according to Vesti.ru – and in 1965 was smuggled out of Britain and made his way to Moscow via Berlin, according to his official biography on the SVR site.

He is ranked a Colonel of the Foreign Intelligence Service, and lives just outside Moscow. In recognition of his service, he was awarded the Lenin Order, the Order of the Red Banner, the Order of the Great Patriotic War (I Class), the Order “For Personal Courage,” the Order of Friendship, and numerous medals and honors including Honored State Security Official.