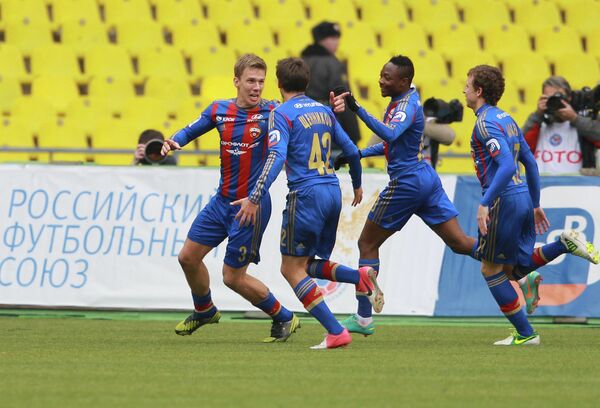 Leonid Slutsky's side go four points clear of Anzhi Makhachkala, though the Dagestanis can restore the difference to one against Lokomotiv Moscow on Sunday.

"It was difficult, no-one has it easy in Krasnodar, but we made it easier for ourselves. It was tough but we deserved it," said Slutsky in televised comments.

"The game just didn't work out. We lost to a classier team," Krasnozhan said, whose side had centerback Luis Ricardo Zelau sent off in the last minute for a second booking.

CSKA went ahead on 35 minutes, when Musa finished clinically after a cutting through ball from Alan Dzagoev.

The lead only last nine minutes, however, as Armenian striker Aras Ozbiliz equalized from the penalty spot.

Musa restored the visitors' advantage six minutes into the second half, slamming home the rebound after Alexander Belenov had saved Dzagoev's shot.

CSKA went 3-1 up on 57 minutes with Rasmus Elm curling a glorious effort into the top corner from 30 yards out.

Keisuke Honda should have put CSKA in front after just four minutes but the in-form Japan international casually stroked wide 12 yards out.

Honda hit a half-volley on the fall soon after that forced a reflex save out of Alexander Belenov.

Belenov, who has been linked with Zenit St. Petersburg since his first callup to the Russian national team last week, came to rescue again on 25 minutes, palming over a stinging drive from Ahmed Musa.

The Nigerian makeshift striker went one better soon after, dinking the ball over Belenov to give his team the lead.

But the hosts came back into it late in the half when CSKA goalkeeper Igor Akinfeev was adjudged to have brought down Ibrahima Balde in the box.

The penalty decision was hotly disputed by CSKA but their protests were in vain.

The controversy seemed to put wind in CSKA's sails, as Leonid Slutsky's side scored two in 12 minutes after half time to all but seal the win.

Musa took his tally to seven goals in ten league games before Elm hit his rocket off Zoran Tosic's layoff.

Musa, a natural winger who started playing up front this season due to an injury to star striker Seydou Doumbia, missed the chance for his first Premier League hat-trick on 72 minutes, rounding Belenov but contriving to miss.

And Terek Grozny bounced back from two straight defeats as they ran out 2-1 winners at home strugglers Mordovia Saransk.

In the first match of the round on Friday, FC Rostov ended their six-game winless run in emphatic style Friday with a 3-0 home thrashing of Amkar Perm.