Chan Storms to Victory in Cup of Russia 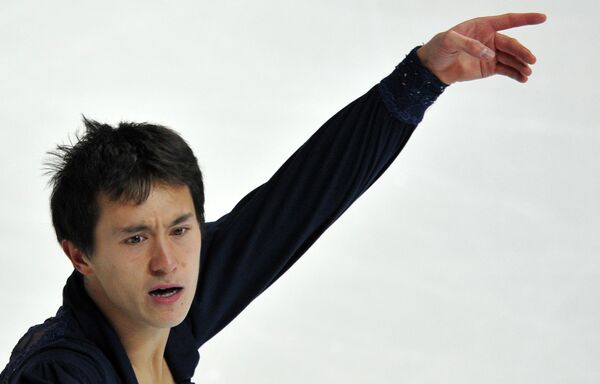 © RIA Novosti . Vladimir Pesnya
/
Go to the photo bank
Subscribe
World champion Patrick Chan won his first title of the season at the Cup of Russia on Saturday after a commanding performance.

MOSCOW, November 10 (R-Sport) - World champion Patrick Chan won his first title of the season at the Cup of Russia on Saturday after a commanding performance.

Czech skater Michal Brezina, 22, took third with a score of 224.56 after a season-best score of 150.73 in the free skate allowed him to rise from sixth after the short program and take advantage of error-strewn free skates from his rivals.

Russia’s Konstantin Menshov, Artur Gachinski and Zhan Bush had all been expected to challenge for medals in front of the Moscow crowd, but all three underwhelmed.

Veteran Menshov, 29, was second after the short program, but finished fourth overall after a score of 146.99 in the free skate meant he missed out on a first Grand Prix podium.

Gachinski, 19, dropped two places in the free skate to finish seventh, while 19-year-old Bush had been fourth before an erratic free skate won him just 124.87 points, with an especially low technical score, and saw him slip to seventh in his first Grand Prix.

Japan’s Nobunari Oda performed the day’s second-best free skate, scoring 154.74, but his eighth-ranked short program prevented him from challenging for a podium place, giving him an overall score of 217.92 that was good enough for fifth.