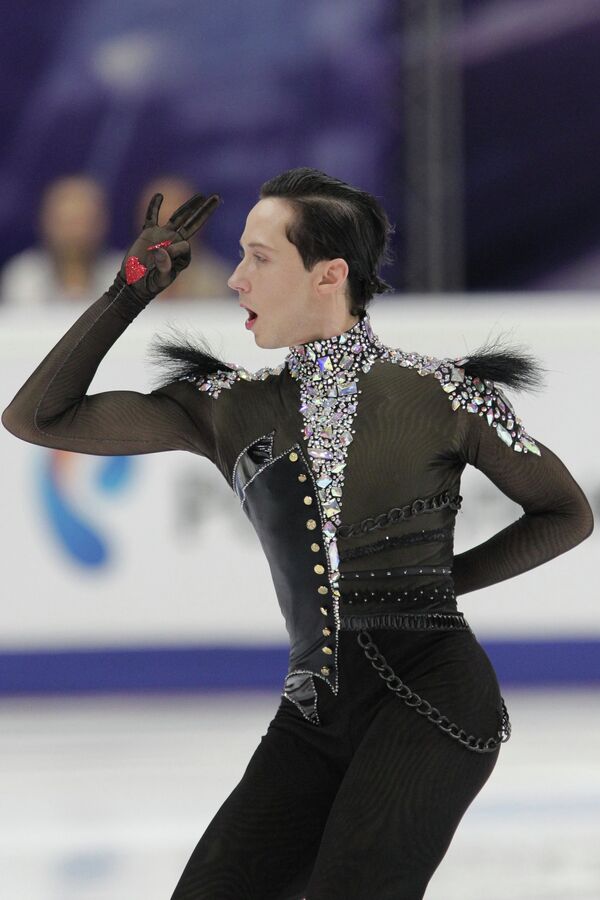 © RIA Novosti . Maxim Bogodvid
/
Go to the photo bank
Subscribe
Four-time Grand Prix winner Johnny Weir told R-Sport on Saturday that he was withdrawing from the Cup of Russia due to an old knee injury flaring up.

MOSCOW, November 10 (R-Sport) - Four-time Grand Prix winner Johnny Weir told R-Sport on Saturday that he was withdrawing from the Cup of Russia due to an old knee injury flaring up.

Weir was competing for the first time since the 2010 Winter Olympics but pulled out before Saturday’s free skate in Moscow and could now be out of the Trophee Eric Bompard next week.

“This is a very terrible setback and I’m not happy, but things happen in sports,” Weir said.

The three-time U.S. champion said a problem with his anterior cruciate ligament had hampered his short program skate on Friday, when he finished tenth in an error-strewn performance.

“About a month ago I had a terrible fall in practice and then I reagitated the same injury with my ACL at the beginning of this week and yesterday I tried in the competition,” he said.

“This is not what I wanted to happen here and I wanted to compete and to perform and I’m so sad.”

Patrick Chan of Canada leads from Russia’s Konstantin Menshov ahead of the free skate.

Weir, 28, said he expected crisis talks with his national federation about the Trophee Eric Bompard.

“I’m unsure if they’ll be open to it, simply because I’ve withdrawn from one Grand Prix and the other one could give a chance to another skater that has never competed in a Grand Prix before, so this evening I’ll be sitting on the phone with America all night,” he said.

Weir admitted he is not yet in top competitive form following his decision to return to the competitive circuit after two years away.

“I’ve had problems with my body and my condition since I’ve come back to the sport. I’ve had a very rapid weight loss to get prepared and my body hasn’t completely learned again what it’s like to fall,” he said.