Int’l Election Observers: US Must Respect the Rules 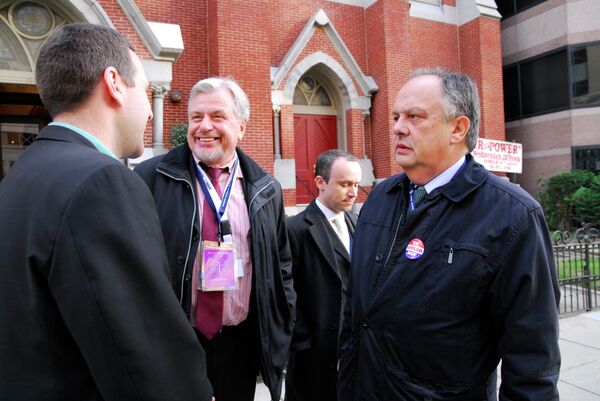 © Photo : Maria Young
Subscribe
The United States must respect its own commitments to facilitate international observers during its elections, the head of an election monitoring group from the Organization for Security and Cooperation in Europe (OSCE) told RIA Novosti on Tuesday.

WASHINGTON, November 6 (By Maria Young for RIA Novosti) The United States must respect its own commitments to facilitate international observers during its elections, the head of an election monitoring group from the Organization for Security and Cooperation in Europe (OSCE) told RIA Novosti on Tuesday.

As a founding member of the OSCE, the United States “has engaged itself in rules that it must respect,” said João Soares, leader of the OSCE election mission monitoring US voting precincts nationwide Tuesday.

Soares, a former member of the European Parliament, was referring to several US states whose laws prevent international observers from monitoring elections at polling stations.

“These are the United States, but in some ways they each have their own rules,” Soares said. “It’s like they have 50 different electoral systems.”

The OSCE is a regional security organization, made up of 56 UN member nations, that sends observers to elections in member states, including the United States and Russia.

Soares and other international election monitors were at a polling station in Washington on Tuesday afternoon, where they questioned election workers about everything from plans for handling heavy evening turnout to what happens when a voter’s name isn’t listed on the registry.

“Most of our member nations are new democracies, and we want to be sure nobody accuses us of double standards, so it’s important that we apply the same criteria,” said Andreas Nothelle, an OSCE special representative and one of the observers at the Washington polling station.

Texas, Ohio and Iowa irked the OSCE last month by announcing that international monitors would not be allowed to enter polling precincts and observe the election process, citing state laws requiring them to stay at anywhere from 100 to 300 feet (30 to 90 meters) from the precincts.

“That’s what the state law says, so to change that you’d have to talk to the state legislature,” Matt McClellan, a spokesman for Ohio’s secretary of state, said by telephone Tuesday.

Officials in Texas and Iowa had warned that international observers could be arrested if they violated the restrictions, but election officials reported no problems as of Tuesday evening.

“We do obey the local laws, but this isn’t in line with the US commitment to allow international observers access to the entire process,” said Thomas Rymer, a spokesman for the Office for Democratic Institutions and Human Rights (ODIHR), the OSCE’s election-monitoring arm.

The skirmish spiraled into the social media sphere in the run-up to Tuesday’s presidential election, spawning hostile comments on Twitter.

“If a UN observer watches me vote Tuesday I'll punch 'em in the throat,” one Twitter user wrote.

If a UN observer watches me vote Tuesday I'll punch 'em in the throat.

“Is the UN aware that TEXANS open carry HANDGUNS when they VOTE? Headlines: UN observer pistol whipped by Texas Grandma of 6!” another user tweeted.

@megynkellyIs the UN aware that TEXANS open carry HANDGUNS when they VOTE?Headlines: UN observer pistol whipped by Texas Grandma of 6!

Soares said US elections can be “shocking” to first-time international observers, in part because of the amount of money involved, but also because of the overwhelming number of ads—which he described as “propaganda”—as well as the overall openness of the process.

“I feel people are very confident,” of the electoral process in the US, Soares said. “In some other countries, people are afraid to show how they voted, but here they can say, ‘I’m a Republican,’ or ‘I’m a Democrat.’”

The election of US President Barack Obama in 2008, he said, proved to him that candidates in the United States don’t need as much money to wage a strong campaign, because “you can start to run without money, and the money will appear if you get the attention.”

But no election is perfect, and the resistance in some states to observers violates the spirit of OSCE members’ commitment to facilitate the organization’s monitors, Soares said.

OSCE are expected to release preliminary reports of their findings on Wednesday and Thursday.