Syria Pledges No Use of Chemical Weapons - Russia 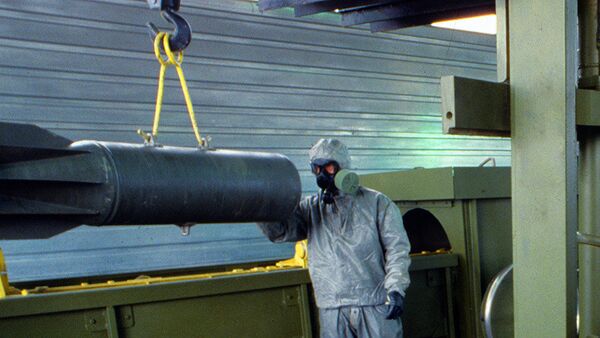 The Syrian authorities have assured Moscow that there will be no use of chemical weapons against rebel forces, Russia’s foreign minister said on Tuesday.

AMMAN, November 6 (RIA Novosti) - The Syrian authorities have assured Moscow that there will be no use of chemical weapons against rebel forces, Russia’s foreign minister said on Tuesday.

“I rule out the use by the [Syrian] regime of chemical weapons,” Foreign Minister Sergei Lavrov told journalists. “We have received the appropriate assurances.”

Syria has not signed the international Chemical Weapons Convention and is believed to possess mustard gas and sarin, an extremely toxic nerve agent. The CIA says Syria has had a chemical weapons program "for years” and that the weapons can be “delivered by aircraft, ballistic missile, and artillery rockets" But Syria has never deployed the weapons, although it warned this summer that they could be used against “foreign invaders.”

A major who defected from Assad’s embattled regime told The Times newspaper last month that the authorities would only use chemical weapons as a “last resort.”

“We discussed this as a last resort – such as if the regime lost control of an important area,” Major General Adnan Sillu said after arriving in Turkey.

Speaking in the Jordanian capital of Amman, Lavrov, said Russia was winding down arms sales to Assad’s regime.

“We will conclude the deliveries of weapons under old contracts,” he said.

Russia has been criticized by Western powers over its ongoing arms deliveries to Syria, its sole remaining ally in the Arab world. But Moscow says the weapons are purely defensive in nature and in line with international law.

But Lavrov accused unnamed Western countries on Tuesday of sending weapons, including Stinger ground-to-air missiles, to Syrian rebels. “There are some 50 Stingers on Syrian territory,” he said.

Russia’s top diplomat also called for the return of UN observers to Syria, where tens of thousands of people have died since the onset of a civil war 18 months ago.

“Part of our position is that the UN observers should return to Syria, and in larget numbers,” Lavrov said.

A 300-strong team of unarmed UN observers left Syria in August after their mandate expired. The observers were deployed in April to monitor a UN-brokered truce that failed to take hold.

Russia and China have voted down three attempts by Western powers to impose international sanctions on Assad’s regime. Moscow said the proposed resolutions betray an anti-rebel bias and would do nothing to bring peace to the Middle East country.