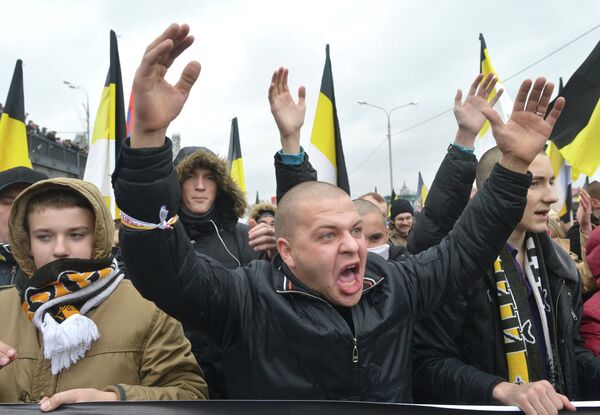 “Russia for Russians, Moscow for Muscovites,” chanted protesters, many with their faces covered by scarves or surgical masks, as a police helicopter hovered above. Police said 25 people were arrested for displaying Nazi symbols as the march started.

“Immigrants show no interest in assimilating into Russian society,” said Sergei, a 25-year-old office worker, who declined to give his surname. “If things don’t change, we could see massive ethnic clashes,” he said, as protesters gathered opposite Gorky Park.

Police said some 6,000 people had attended Sunday’s approved march, but organizers put this figure at 10,000.

Unsanctioned nationalist rallies also took place across the country, with dozens of arrests reported in St. Petersburg, the Tatar capital, Kazan, and Yekaterinburg in the Urals.

Russia’s myriad nationalist groups have gathered every year in Moscow on National Unity Day since the public holiday was instituted in 2005. But this is the first time in four years the so-called “Russian March” has been held in the city center.

Sunday’s march, which wound past the Christ the Savior Cathedral, was headed by religious activists wearing black “Orthodoxy or death” t-shirts and holding aloft religious icons and crosses.

“I am against immigration,” said Leonid Simonovich-Nikshich, the white-bearded head of the militant Union of Orthodox Banner-Bearers movement. “And I am against the idea of tolerance and political correctness – the Bible makes no mention of tolerance.”

There was no violence reported on the march, but leftist activists later said they had been attacked by a group of about 30 nationalists at a metro station near Red Square.

“Nationalists chanting ‘Glory to Russia!’ attacked my fellow anti-fascist activists and threw one of them onto the tracks,” Revolutionary Socialist Movement member Isabel Magkoeva told RIA Novosti. She said three activists had been taken to hospital after the attack. A Moscow police spokesperson said they had received no reports of violence at the station.

The head of Russia’s Federation of Migrants Muhammad Amin Majumder slammed last week the decision to allow nationalists to rally in the city center on National Unity Day.

“The march could split society,” he told RIA Novosti. “There are millions of Russians who do not share the nationalists’ views.”

Racial tensions in Russia have been exacerbated by mass labor immigration from former-Soviet Central Asian republics such as Tajikistan, and by frequent clashes in Moscow and other major cities between ethnic Russians and youths from the North Caucasus.

Nationalists point to high crime rates among illegal immigrants as proof that the Kremlin’s migration policies have failed. Moscow investigators said earlier this year that illegal immigrants were responsible for around one-third of reported rapes in the city.

Anger over how the police handled the investigation into the killing of ethnic Russian football fan Yegor Sviridov by a group of youths from the North Caucasus resulted in some 5,000 nationalists and football hooligans rioting outside the Kremlin walls in December 2010. Nationalist groups also accuse the Kremlin of seeking to pacify the volatile North Caucasus region with disproportionate federal budget funding.

The police have claimed success at breaking up neo-Nazi groups in the Moscow region. But race-hate crime figures remain high: 20 people were killed and at least 130 wounded in racially motivated attacks across Russia last year, according to the Sova center for research into nationalism and racism.

Some at Sunday’s march even expressed sympathy with Anders Breivik, the ultra-right Norwegian terrorist who in 2011 killed over 70 people, many of them teenagers, in what he called an attempt to save the country from multiculturalism.

“What else could he do?” said Igor Baranov, a 20-year-old student. “It was a cry of desperation. The same thing could easily happen here if the authorities don’t act.”

President Vladimir Putin has described himself as a nationalist, and in January pledged to crack down on “aggressive, provocative and disrespectful” internal migrants who fail to respect “the customs of the Russian people.”

But he also warned against promoting the creation of a “mono-ethnic, national Russian state,” calling it “the shortest path to both the destruction of the Russian people and Russia’s sovereignty.” However, an opinion poll carried out in August by the independent, Moscow-based Levada Center indicated that 41 percent of Russians agree to some extent with the nationalist slogan “Russia - only for Russians.”

Opposition figurehead Alexei Navalny, who spoke at last year’s Russian March, apparently sought to distance himself from this year’s event. His spokeswoman said last week that while Navalny, head of the anti-Putin movement’s newly formed opposition council, would attend, he was not planning to address the crowd. But Navalny tweeted on the eve of this year’s march that he had come down with “flu.”

“Putin may be an ethnic Russian, but he does not operate in the interests of his own people,” said Vladimir Tor, one of the organizers of the march, when RIA Novosti visited him in his plush downtown Moscow office ahead of the event. “He acts in the interests of the oligarchs and his own security elite, people from the former KGB.”

“Ethnic Russians are suffering,” added Tor, 44, one of the five nationalists in the opposition council. “All other ethnic groups in our country have their own republic within Russia, but there is no republic for ethnic Russians.”

Tor’s National Democratic Party said earlier this year that the party had been “almost entirely cleansed of so-called skinhead elements” and Tor, an articulate, well-dressed businessman with a neat goatee, has little in common with popular images of far-right thugs.

But his rhetoric is familiar, echoing the ideas of nationalist groups across Europe.

“I am absolutely against immigration,” he said, sitting in front of a large map of Russia. “Sociological studies demonstrate that mass immigration from countries with different cultures, ethnic groups, and religious beliefs causes problems.”

“We can see this most clearly right now in France, where we see a conflict between the traditional population and immigrants from Africa and the Arab world,” he goes on. “It’s possible that Europe has crossed the point of no return, as far as immigration goes. We do not wish Russia to share the same fate.”

And although he condemned the race-hate violence that has claimed the lives of over 200 people of “non-Slavic appearance” since 2008, Tor said the killings amounted to “an insignificant” proportion of the some 30,000 murders that take place in Russia each year.

“It would be really surprising, actually, if they did not occur,” he said.

Tor stressed that large-scale race-hate disturbances would be unavoidable if the Kremlin fails to address the concerns that millions of Russians have over immigration.

“I would prefer this problem to be resolved by parliamentary means. And I see no reason why it cannot be,” he said. “But the fewer the legal means to solve the issue, the more violence there is on the streets.”