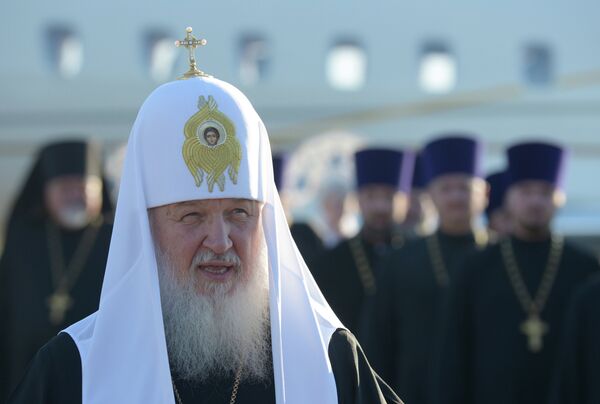 © RIA Novosti . Sergei Pyatakov
/
Go to the mediabank
Subscribe
International
India
Africa
The Patriarch of Moscow and All Russia on Saturday urged Russians not to abandon their traditional spiritual values, and warned against a return to the “Time of Troubles.”

MOSCOW, November 3 (RIA Novosti) – The Patriarch of Moscow and All Russia on Saturday urged Russians not to abandon their traditional spiritual values, and warned against a return to the “Time of Troubles.”

Speaking on The Pastor’s Word TV show ahead of National Unity day on November 4, the Patriarch said that this year marked the 400th anniversary of a ‘momentous’ event.

He focused on the Time of Troubles, a volatile period of internal political intrigues, uprisings, and foreign attack in the late 16th – early 17th centuries, noting “the enemy got all the way to Moscow, barely meeting any opposition – and entered the Kremlin.”

Using this historical reference point as a parallel for developments today, the Patriarch warned that 400 years ago "treason" had been cloaked in the rhetoric of the “modernization of the country” as a “great and holy mission.”

“So, too, today we must first and foremost make sure we prevent this ‘time of troubles’ from taking hold in our consciousness, in our minds,” the Patriarch warned. “Today there are people, like the Boyars of Muscovy, who present unacceptable recipes for the modernization of our lives and improvement of our people’s living standards.”

However, he explained that the country should not respond by taking an isolationist course, rather it should focus on ensuring that "the state's sovereignty, its national honor, territorial integrity are not sacrificed to these ends," and added "they will not break the fundamental spiritual and moral foundations of people's lives."

He also spoke of the bonds of Slavic identity and Christian faith that unite the peoples of Poland and Russia, despite the two countries’ fractured relations over the years.

Since 2005, November 4 has been a national holiday in Russia. Known as National Unity Day, the date marks the liberation of Moscow from occupation by the Polish-Lithuanian Commonwealth in 1612.

Many people in Russia, however, view it as a post-Soviet replacement for the November 7 holiday which marked the Bolshevik revolution of 1917.