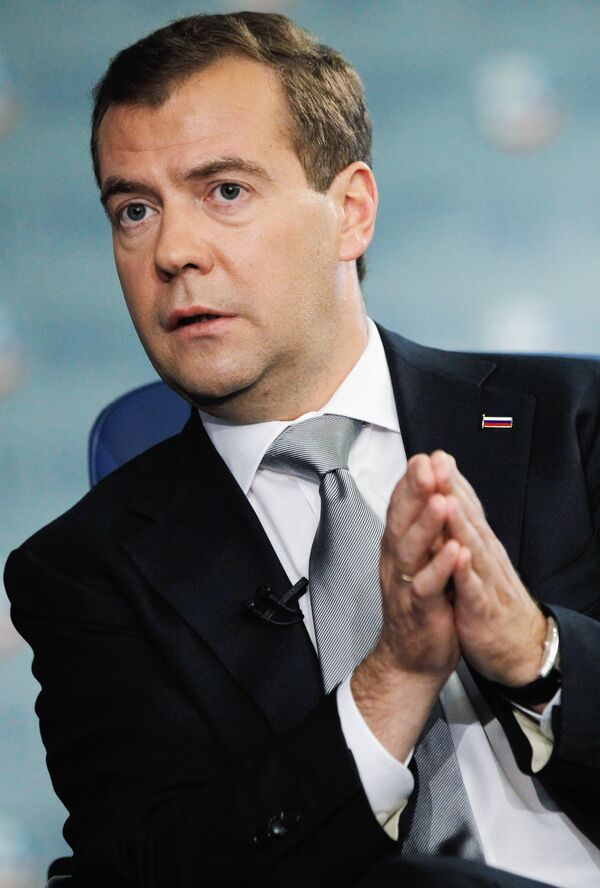 Further imprisonment for two members of the punk band Pussy Riot is excessive, but it is up to the court to decide on the issue, Russian Prime Minister Dmitry Medvedev said on Friday.

GORKI, November 2 (RIA Novosti) - Further imprisonment for two members of the punk band Pussy Riot is excessive, but it is up to the court to decide on the issue, Russian Prime Minister Dmitry Medvedev said on Friday.

“This issue should be addressed not to me but to our courts and their lawyers. They are entitled to submit the relevant motions… And the court is entitled to consider the issue on its merits,” Medvedev said at a meeting with winners of international educational competitions.

He said he had already voiced his opinion on the topic.

“I said quite a while ago: I very much dislike these figures, both on the outside and inside; they cause extremely negative emotions, so negative that it is even unpleasant to speak about them,” the premier said.

“But if I were a judge, I would not put them in prison. I do not think imprisonment the right kind of punishment for them, for these girls have already served some time, and it is really enough for them,” Medvedev said.

Five women from Pussy Riot performed in late February a “punk prayer” in downtown Moscow’s Christ the Savior Cathedral, which is Russia’s biggest Orthodox church. An edited clip of the band’s protest posted online showed the group high-kicking near the entrance to the altar of the cathedral accompanied by the song “Holy S**t” urging the Virgin Mary to “drive [Vladimir] Putin out.” The song mocked Patriarch Kirill of Moscow and All Russia and believers in insulting terms.

Soon after, police arrested three of the suspected performers. The three women said their performance was a political protest against Patriarch Kirill's support for Putin ahead of the March 4 presidential elections that returned him to the Kremlin, but the court found the performers guilty of hooliganism aimed at inciting religious hatred and jailed them for two years each on August 17.

The prison term for one of them was later replaced with a suspended sentence.

The trial and sentences attracted unprecedented media attention and international criticism, which the Russian Foreign Ministry dismissed as "groundless," saying the band's act had nothing to do with artistic performance but was "insulting to millions of Orthodox [Christian] believers." The band said their performance was not aimed at insulting believers' feelings.