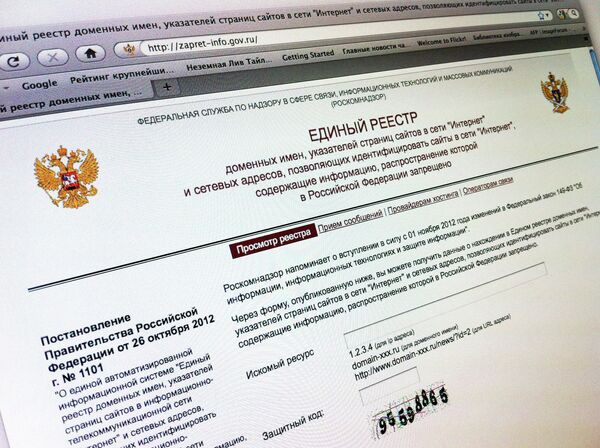 © RIA Novosti
Subscribe
The Pirate Party of Russia said on Thursday it would take on the newly introduced governmental Internet blacklist by launching a web service providing access to the banned web resources.

MOSCOW, November 1 (Alexey Eremenko, RIA Novosti) – The Pirate Party of Russia said on Thursday it would take on the newly introduced governmental Internet blacklist by launching a web service providing access to the banned web resources.

The service, Rublacklist.net, would be providing access to blacklisted pages without hosting them, as well as offering guidelines on how to circumvent blacklisting, the head of the unregistered party, Pavel Rassudov, said at a press conference in Moscow.

But even informational resources such as Wikipedia are liable for blacklisting due to pages on subject such as suicide and cannabis cultivation, Rassudov said.

The Pirate Party's “un-blacklisting” would not be automatic, but decided by its editorial boards, he said. However, only “unethical” content such as child pornography would not be eligible for Rublacklist.net's help.

Controversial items such as the Innocence of Muslims film – which triggered mass anti-US protests after appearing on YouTube earlier this year – can count on the Rublacklist.net to provide access to them in case of a ban, Rassudov said.

There are no guarantees the anti-blacklist site would not itself end on the blacklist, conceded the members of the Pirate Party of Russia, one of 40-plus such political entities worldwide.

But creators of the Rublacklist.net – whose servers are located outside Russia’s jurisdiction, are ready to square off with the Federal Mass Media Inspection Service in cyberspace, offering a slew of mirror sites in order to keep the site accessible, said senior party member Vladimir Chizhevsky.

“The government’s resources are finite, but the internet is endless,” party founder Stanislav Shakirov said.

The state blacklist is not public, though users can check whether a particular website is blocked. The Federal Mass Media Inspection Service said it received more than 160 ban proposals submitted by users in the hours it was online, and blacklisted six sites with child pornography.

But the majority of submissions were “trolling” proposals asking, for example, to blacklist the blacklist site, Rassudov said.

The ban would force Internet providers to increase prices 20 to 70 percent, according to expert estimates, to offset the costs of enforcing the ban, said Shakirov.

Critics have claimed the law is part of the Kremlin’s undeclared legislation reform aimed to make persecution of political opponents easier, which also includes vaguely formed bills on slander and treason that were passed recently.

Leadership of the Pirate Party, created in 2010 and still struggling to obtain registration with the Justice Ministry, said on the sidelines of the press conference that they expect the blacklist to be abused for political gains, and are ready for it.

“Of course we’re scared of an administrative crackdown [on us],” Rassudov said. “But at least we’re [legally] protected as far as the law’s text goes.”

The Federal Mass Media Inspection Service has not commented on the initiative as of Thursday afternoon.